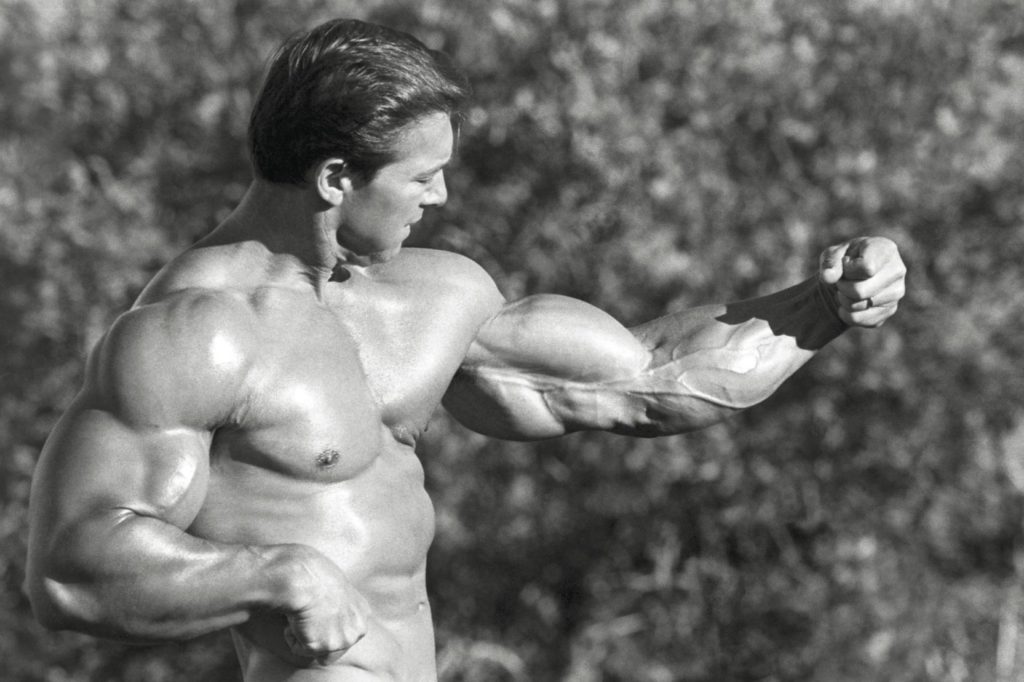 When it comes to thinking about the great bodybuilders from the golden era and earlier names like Arnold Schwarzenegger, Frank Zane, Franko Columbo and Serge Nubret come to mind.
One bodybuilder that these guys looked up to who is rarely discussed today is Larry Scott, winner of the first ever Mr Olympia title in 1965.

Larry had an impressive physique however he did have lagging shoulders, Vince Gironda (who was training Larry Scott at the time) invented the Scott Press together, a dumbbell based shoulder exercise much like the Dumbbell Arnold Press you see many guys perform in the gym today, however the Scott Press has a smaller range of motion and is extremely efficient at hitting all three heads of the deltoids.

How To Perform The Scott Press Correctly

Grab a pair of dumbbell and either stand upright or sit down on a flat bench (standing up increases core activation).

Lift the dumbbells up to the height of your shoulders while proceeding to lean in 15 degrees.

Begin to press the dumbbell from just below ear height to just below locking out at the top of the repetition – ensure tension is maintained on the shoulders for the entire duration.

Lower the dumbbells back down to ear height and repeat for the desired number of repetitions.

The Scott Press is a fantastic exercise to add to your shoulder workout, particularly if you’re having trouble getting them to grow… however that said the Scott Press can be a disaster if implemented into your regime incorrectly. Here are my tips on tricks on when and how to use the Scott Press to get the best bang for your buck.

There are a heap of shoulder exercises we can lift heavy on, i.e. the military press and dumbbell shoulder press – when it comes to the Scott Press leave your ego at home at focus on light weight for 15+ reps per set.
The risk of injury is too high when going heavy and all out with the Scott Press – keep it controlled and light while focusing on time under tension – that is how you’ll use the Scott Press to build mammoth shoulders.

Dont Ever Lock Out

The key to the Scott Press is the small range of motion we’re working in, never lock out at the top of each repetition as you’ll be taking the load off the targeted muscle.

Use The Scott Press For Pre-Fatigue Training

“SJ, why does it matter which exercise we pre-fatigue with? As they’re both shoulder exercises”

The dumbbell front raise targets the anterior (front) deltoid, while the Scott Press target all three heads of the deltoid (anterior, posterior & medial).
When pre-fatiguing we ideally want to fatigue the shoulder as a whole, not just one third of it, thus making both the Scott Press and the Arnold Press fantastic choices for shoulder pre-fatigue training.

What’s Your Take On The Scott Press? Let Me Know Below!

Scott J.https://ignorelimits.com
I’m SJ. I’m a fitness enthusiast and published author. I transformed my body from a skinny fat 135lbs with 18% body fat to a solid 192lbs at 8% body fat. I became qualified in a field I was passionate about. I founded several online businesses that allow me to pursue ideas and projects in my life that I am passionate about without having to constantly worry about money. I published several eBooks explaining the training and dieting techniques I used to achieve the body I have today. I learnt a plethora of new information on dieting and fitness by reading and applying what I read, to find out what does work and what doesn’t work, because as I’m sure you’ve noticed the health and fitness industry is full of non-sense claims and BS. I found out what was true and what worked for me and applied that knowledge. And you bet I had fun during the whole process.
Previous article
The Bro Split Workout
Next article
The Contrast Shower: A Simple Technique For Recovery And Energy

Ice Bath Benefits: 7 Reasons Why You Need To Incorporate Ice Baths Into Your Recovery Routine

How To: Handstand Push-Up

Become A Lion Among Sheep With Successful Habits