The Fish That Ate The Whale Summary (The Banana King)

The Fish That Ate The Whale Summary 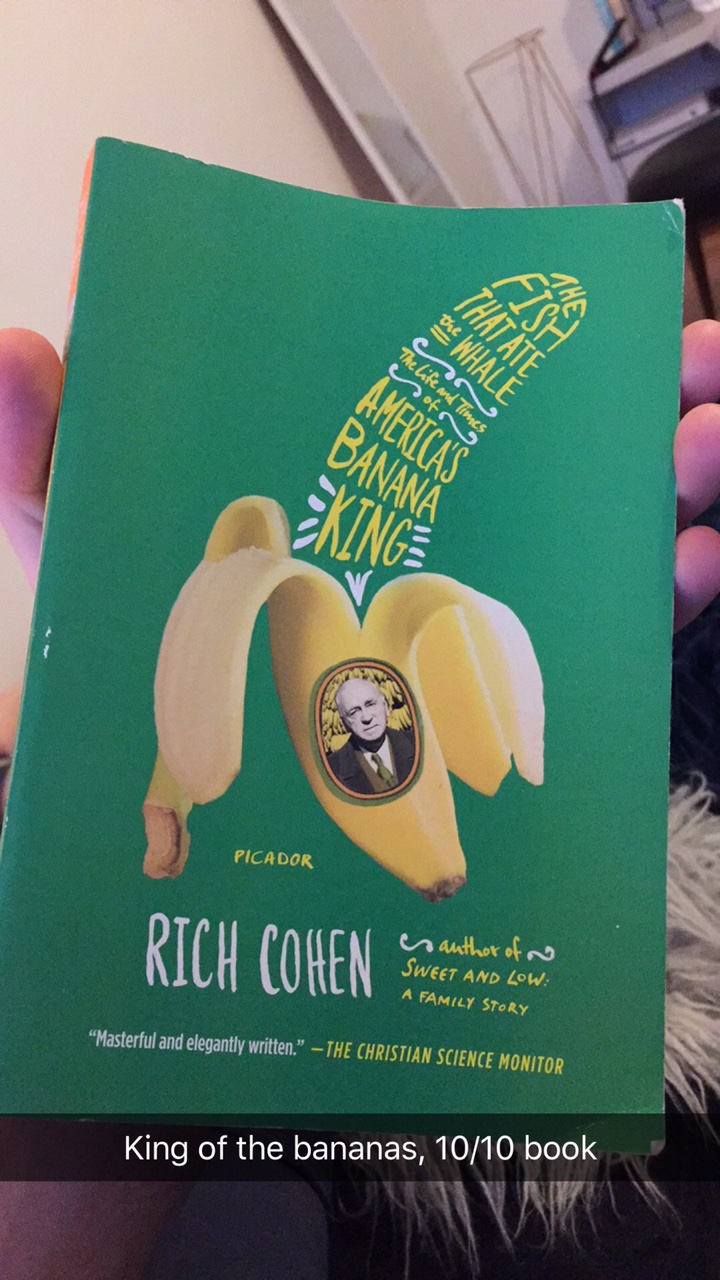 ‘The Fish That Ate The Whale‘ tells the tale of Samuel Zemurray, a Russian born, hawk eyed, slender man with vision and the love of the grind pulsing through his veins.

From seeing a banana for the very first time to hustling on the docks, buying and selling over-ripe bananas in a race against the clock to spearheading his own huge banana plantations in the Honduras.

From nothing but an idea and holes in his pockets to the sale of Zemurray’s company for $31.5 million dollars in stock  and his appointment as president of the behemoth company, United Fruit.

Lessons From The Life & Times Of The Banana King

If you’re an entrepreneur or merely looking to build the momentum to improve your life you’ll find a ton of motivation, great quotes and ideas within the pages of this book as Rich Cohen delves into the life of Sam ‘The Banana Man’ Zenmurray.

Below are the key lessons I took from his journey from the bottom to the top. 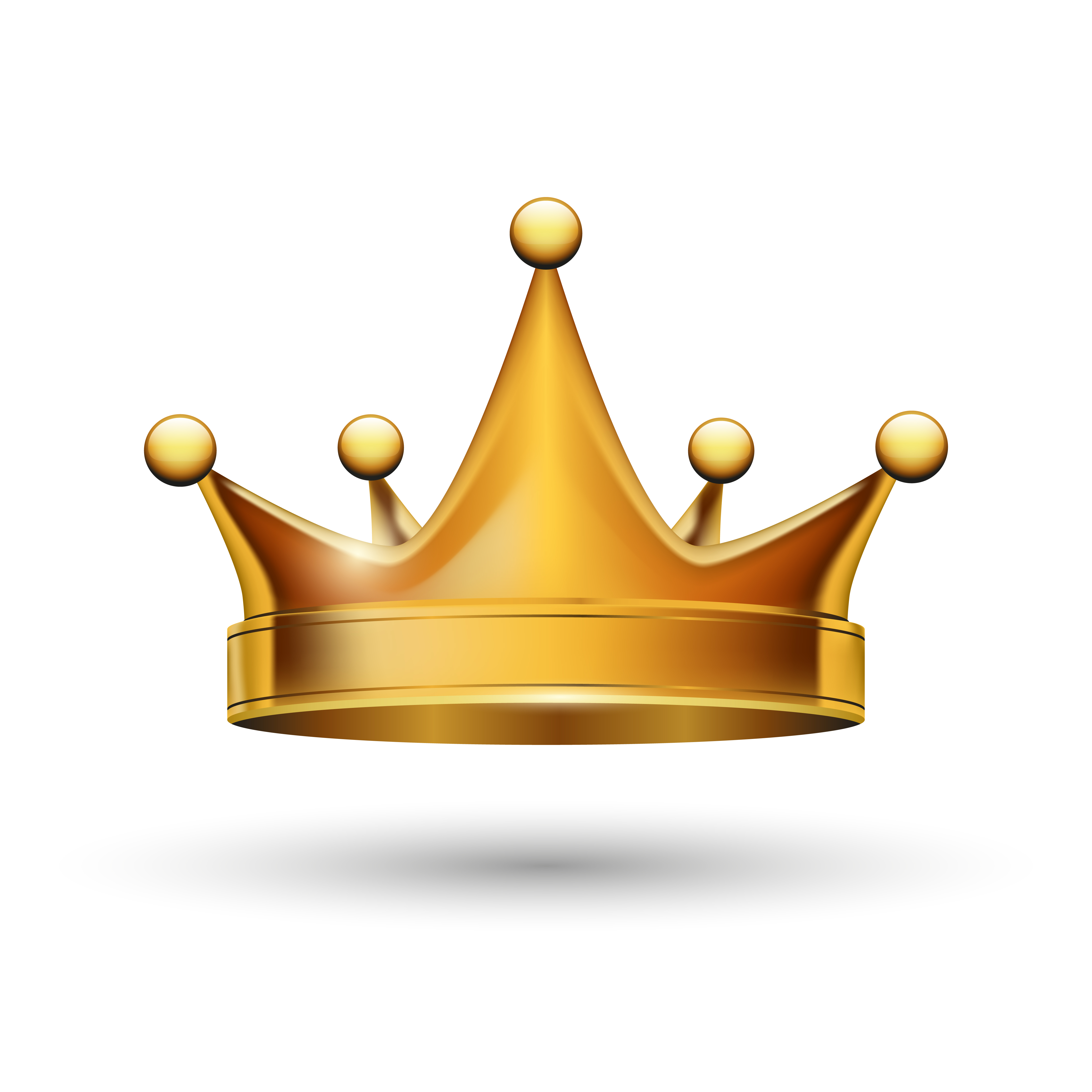 Start At The Bottom & Fight Your Way To The Top

You’re not entitled to the prestige and the rewards of being at the top and the only way to get there is to start from the bottom and work your way up.

They spend all their time and energy looking for a way straight to the top, instead of spending time working their way up and seeing tangible results they achieve nothing.

Zemurray’s work ethic and constant drive were without a doubt the #1 contributing factor to his success.

He started at the bottom, peddling over-ripe bananas that were deemed useless, abandoned at the docks until he had enough capital to invest in ripe bananas and eventually grow and haul his own plantations. He did what he had to do during the climb to make it to the top – paying bribes to reduce import taxes, putting people out of business, spending large amounts of time alone.

The way to the top is and always will be by starting at the start and taking step by step, fighting and climbing with endless endurance until you’re in that top spot.

You can’t fix or improve something you don’t know or understand properly yourself first.

Zemurray was active in all areas of his banana business… he’d be in the plantation, he’d be in the office, he’d be at the dock and he’d sure as hell be on the phones making calls and doing business for as long as necessary.

Zemurray wasn’t disconnected from his business, he wasn’t a distant or ‘passive’ overseer… he was hands on in the trenches with his men.

Because he was so active in his business he knew everything there was to know about the banana trade, a big competitive advantage over his competition.

“Unlike most of his competitors, he understood every part of the business, from the executive suite where the stock was manipulated to the ripening room where the green fruit turned yellow. He was contemptuous of banana men who spent their lives in the North, far from the plantations. Those schmucks, what do they know? They’re there, we’re here!” – Rich Cohen

Zemurray was making good coin dealing with over-ripe bananas on the docks, thousands upon thousands of dollar at his age, back in that day was more than enough to satisfy the vast majority.
Sam ‘The Banana Man’ was never satisfied.

A happy man is a man that has accomplished nothing.

Understand There’s An Element Of Risk To Growth & Progression

Zemurray took loan after loan until no bank would go no here, he then continued to seek high interest loans from questionable individuals to buy as much land as possible in the Honduras to grow his own bananas. Zemurray saw the location, the soil and the current asking price and knew now was the time to take action and grow his business as aggressively as possible.

“There are times when certain cards sit unclaimed in the common pile, when certain properties become available that will never be available again. A good businessman feels these moments like a fall in the barometric pressure. A great businessman is dumb enough to act on them even when he cannot afford to.”

Being Alone & Being Lonely Are 2 Different Things

Zemurray was far from lonely.

Zemurray was alone, he didn’t have a wife or children in the beginning of his banana business, but he was far from lonely.
He worked endless hours and travelled where ever his business took him with laser-like focus.

He was alone in a physical sense, conducting solo business… but he was not lonely.

To Free The Soul You Must Exhaust The Body

Zemurray believed in the transcendent power of physical labor, in order to free your soul you must push your body to its limits.
The gym is a means of achieiving this, but in Zemurray’s day this was achieved through long hours on the docks loading up bananas, by spending long, humid days in the Honduras, clearing the jungle for the banana plantations.

You cannot achieve this freedom without exhaustion.

You cannot free your soul if you wake up late, spend all day working in an office before retiring on the couch with junk food in the evening.

Get up early and sweat.

As always, anything worthwhile takes time.

Zemurray didn’t attain success the day he decided he was going into the banana business.

He spent years learning everything there was to know about bananas, built his business, learnt his business inside-out and continued to scale up his business.

Highlighted Quotes From The Fish That Ate The Whale 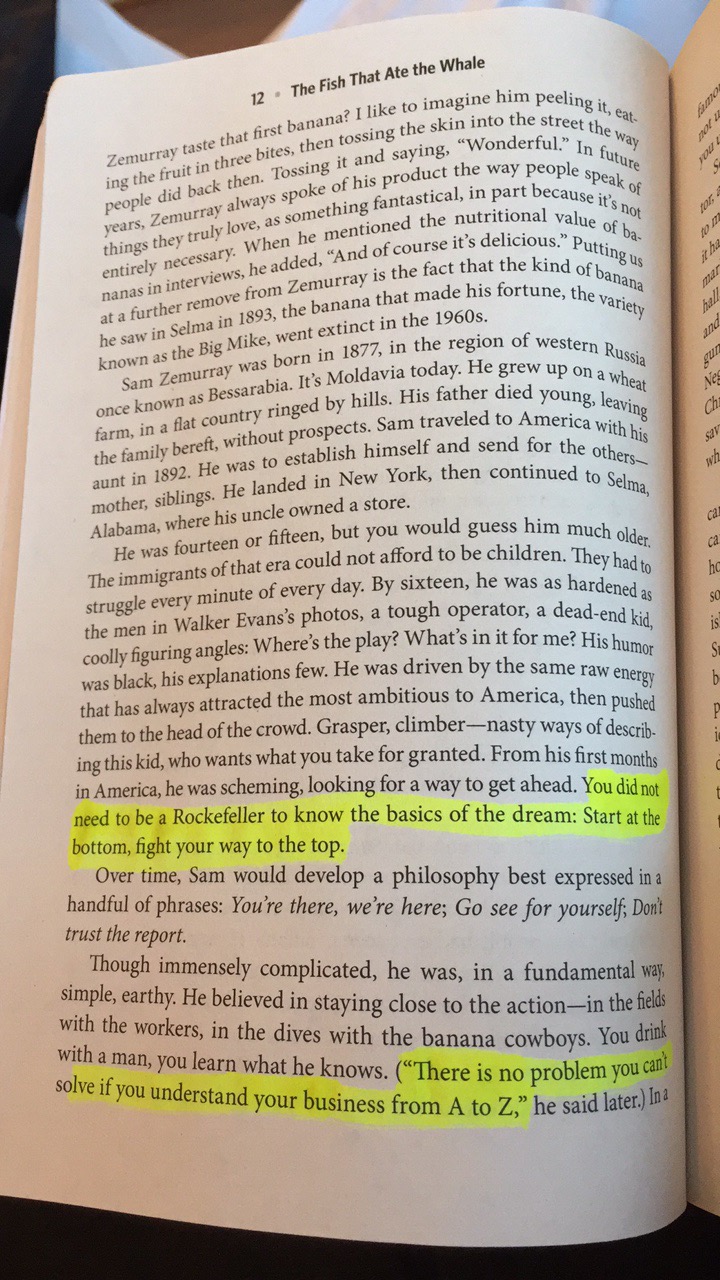 “The world is a mere succession of fortunes made and lost, lessons learned and forgotten and learned again.”

“There are times when certain cards sit unclaimed in the common pile, when certain properties become available that will never be available again. A good businessman feels these moments like a fall in the barometric pressure. A great businessman is dumb enough to act on them even when he cannot afford to.”

“Show me a happy man and I will show you a man who is getting nothing accomplished in this world.”

“a man can free his soul only by exhausting his body.”

“Every great victory carries the seed of ultimate defeat.”

“The greatness of Zemurray lies in the fact that he never lost faith in his ability to salvage a situation. Bad things happened to him as bad things happen to everyone, but unlike so many he was never tempted by failure. He never felt powerless or trapped. He was, as I said, an optimist. He stood in constant defiance.”

Scott J.https://ignorelimits.com
I’m SJ. I’m a fitness enthusiast and published author. I transformed my body from a skinny fat 135lbs with 18% body fat to a solid 192lbs at 8% body fat. I became qualified in a field I was passionate about. I founded several online businesses that allow me to pursue ideas and projects in my life that I am passionate about without having to constantly worry about money. I published several eBooks explaining the training and dieting techniques I used to achieve the body I have today. I learnt a plethora of new information on dieting and fitness by reading and applying what I read, to find out what does work and what doesn’t work, because as I’m sure you’ve noticed the health and fitness industry is full of non-sense claims and BS. I found out what was true and what worked for me and applied that knowledge. And you bet I had fun during the whole process.
Previous article
The One Thing Book Summary – Achieve More By Doing Less
Next article
Sam Walton Made In America Summary

How To Win At The Sport Of Business – Advice From Billionaire, Mark Cuban

Steak And Eggs Diet Results – What Can YOU Expect?

Seneca Letters From A Stoic Summary

How To: One Arm Dumbbell Row