Suicide Grip – The Pros And Cons Of Thumbless Grip When Lifting 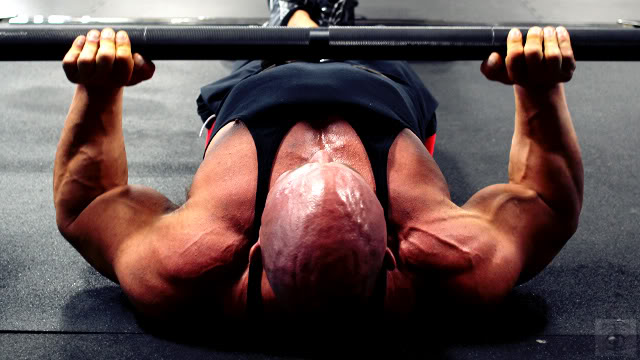 You’ve probably heard the term thrown around before, suicide grip, false grip or thumbless grip… but what actually is this grip, why do hardcore gym-goers use it and does it have any real benefit? Here’s my take on suicide grip and when I use it.

What Is Suicide Grip?

Here’s where the broscience often kicks in.

In many powerlifting groups, bodybuilding gyms and online forums there’s much debate over whether suicide grip actually has ANY benefit at all.

The #1 claim for the reason guys use the suicide grip is for better bar placement when bench pressing, the bar sits in a better position to push from, however as the name suggest this grip, even when the slightest falter, twitch or slip occurs can seal your fate. The barbell sits more comfortably in the palm of your hand during the suicide grip press, however any slight error in movement and you’re done – going from a thumbless grip to a regular grip or hook grip as the barbell starts to to contort or slip is near impossible.

The suicide grip is said to isolate the muscle being trained more effectively.
Although I do not advocate using the suicide grip on exercises such as the bench press (as, even with a spotter they’re unnecessarily risky).

On back exercises such as the pendlay row, pull-up and lat pull-down I’m able to sit the bar more comfortably in my hand and feel further activation in my back, as opposed to my biceps (the secondary muscle group utilized on these pulling exercises).

Hardcore powerlifters and bodybuilders use the suicide grip as a literal ‘do or die!’.

When you’re lowering the barbell with 315lbs down to your chest and no thumbs to secure the bar in position you better hope you’re able to power it back up to the starting position and complete that repetition.

I do not recommend using the suicide grip for this reason, or on any exercise that has you in a compromised position (under the barbell) incase you slip or fail to drive the barbell back up.

What Exercises Should You Use Suicide Grip On?

I’m personally a big fan of the suicide grip and recommend using it on any pulling movement that it feels most comfortable for you on.

The bent over barbell row (pendlay row), lat pulldown, pull-up and seated row can all be performed safely with a thumbless grip.
Next time you’re performing a back workout try disengaging your thumb from the bar and notice the difference – you’ll most likely feel that your back is working harder, as your biceps (the secondary muscle group) are no longer as prominently involved in the exercise).

You may need to drop the weight in order to hit the same number of repetitions, but in the long term unless you’re trying to hit your biceps with these exercises it’s going to be more beneficial in the long term.

What Exercises Should You Avoid Suicide Grip On?

The bench press is the #1 exercise you should avoid using the suicide grip on.
Any pushing movement that places your under the barbell should NOT be performed with a suicide grip, the video above entails exactly why. Even with a spotter or two on standby – when you’ve got anything north of 225lbs on the barbell and you make one wrong move the reaction time of your spotter will likely not be quick enough to save your chest or neck from copping the full force of that weight as it drives downwards onto your chest.

The deadlift is another exercise I do not recommend performing with the suicide grip.
When you’re lifting big numbers you’re going to be limiting yourself as you will not be able to lift anywhere near your max without wrapping your thumb around the barbell or hooking your thumn in to form a hook grip.

What’s Your Take On Suicide Grip? Let Me Know In The Comments Below!

Scott J.https://ignorelimits.com
I’m SJ. I’m a fitness enthusiast and published author. I transformed my body from a skinny fat 135lbs with 18% body fat to a solid 192lbs at 8% body fat. I became qualified in a field I was passionate about. I founded several online businesses that allow me to pursue ideas and projects in my life that I am passionate about without having to constantly worry about money. I published several eBooks explaining the training and dieting techniques I used to achieve the body I have today. I learnt a plethora of new information on dieting and fitness by reading and applying what I read, to find out what does work and what doesn’t work, because as I’m sure you’ve noticed the health and fitness industry is full of non-sense claims and BS. I found out what was true and what worked for me and applied that knowledge. And you bet I had fun during the whole process.
Previous article
4 Exercises To Improve Your Posture
Next article
4 Reasons Why Every Man Should Supplement Zinc

The Power Of Being Impatiently Patient: The Key To Conquering Your Goals

4 Reasons Why Every Man Should Supplement Zinc