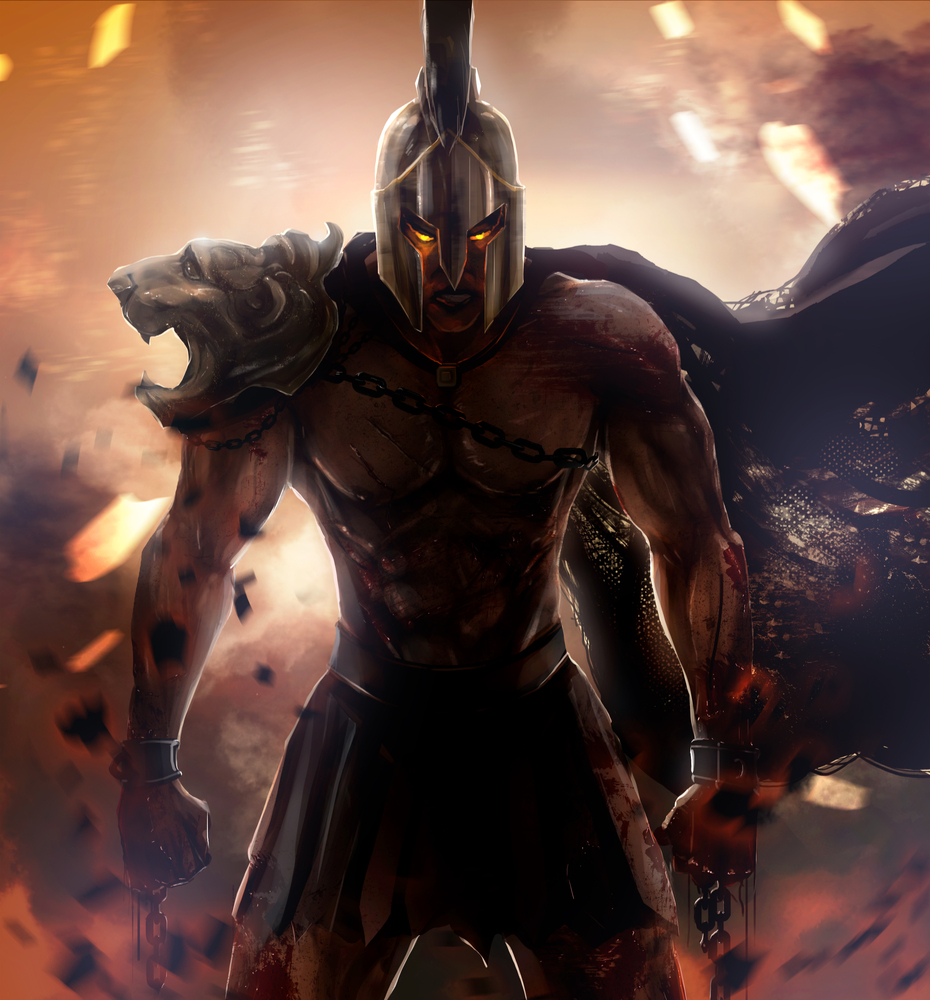 When we think of the ancient Spartans today we think of shredded, muscular warriors with indomitable will and courage both on and off the battlefield.

Quite the opposite to todays’ modern society.

“But SJ, The Spartan were born tough, we don’t live in those times anymore”

You’re right, we don’t live in the days of riding into battle on a horse swinging a pickaxe…

But that doesn’t mean we don’t go to war.

If you’re an entrepreneur it means going to war with your competitors, and innovating your way ahead of the pack.

It’s a different kind of war.

Physical and mental toughness is advantageous in any kind of battle, be it in the boardroom, the battlefield or the basketball court.

The Spartans weren’t born tough, they implemented certain habits and conditioned themselves from a young age.

At the age of 7, Spartan children were enrolled into the agoge, the rigorous training education and training regimen.
The aim of this system was to produce physically and morally strong males to serve in the Spartan army.

They were pushed to their limits both physically and mentally.

And what did this intensive training leave them with?

You don’t have to enrol into an agoge to develop these favorable traits, instead there’s 4 key habits I recommend implementing into your life…

Lifting heavy weights will not only build you a powerful, spartan-like physique, it’ll also help cultivate the mindset that willpower that’ll help you push past the roadblocks, the no’s! and any other form of adversity you’ll face on your journey.

Don’t be the guy that goes straight for the 15lb dumbbells and does set after set of bicep curls.

Follow a program such as StrongLifts 5×5 that’ll build both size and strength with an emphasis on your heavy compound movements.

The squat, the bench press, the deadlift and the overhead press are the key mass moving exercises that you should spend your time grinding away at and mastering.

Add a few extra pounds to the bar each workout.

I attribute the iron discipline I’ve built over the last 3 years to my daily cold showers.

There’s no hiding it, cold showers are uncomfortable.

Freezing cold water (especially in winter!) is uncomfortable and you’re willingly going out of your way to endure it.

The act of forcing your body to withstand the freezing cold temperature of the water gushing out of your shower as the tap is turned as far to the ‘cold’ side as possible is not only invigorating, but when performed daily will build both self-discipline and resilience.

The cold shower is one of several staple habits in my morning routine and I guarantee when you start your day with a 5 minute cold shower the jobs and annoyances you’ve been dreading doing won’t look so bad anymore, you’ve already won because you’ve conquered the hardest, most uncomfortable part of your day only moments after waking up.

You know what you have to do, you know it’s going to suck but you grit your teeth and do it anyway.

Think of yourself like a lion, when you’re in a fasted state you’re quick, agile, motivated… you’re on the hunt and you’re out to kill.

This is your body in a fasted state, before you’ve consumed your first meal.

Once that lion finds and kills his prey he feasts, consuming a lot of food in one sitting. Once the lion has eaten he’s slowed down, he’s lost his performance, he begins to tire, he slows down and no longer has the desire to push forward as he did when on the hunt.

If you’ve ever dismissed intermittent fasting and never actually tried it (which I did for years) I recommend giving it a try for one week.

Over the course of a week take note of:

Your energy in the gym

You’ll find yourself feeling lighter, with more energy particularly when you’re deep amidst your workout.

Your focus reading, writing or working

Your attention to detail, motivation and overall productivity will be boosted. Whether you’re reading or book or writing a research paper you’ll find yourself working far more efficiently when in a fasted state.

Mid day crash? Nope! Fasting through the morning as opposed to slowing your body down and burdening it with the task of digesting large amounts of food early on in the day will leave you energy levels running low as the afternoon approaches…

The Spartans didn’t sit around and eat all day, they saw food as fuel – fuel for battle, fuel to get shit done.

They didn’t hunt high and low through their kitchen cupboards for morning tea, brunch or an evening sneak like people do today out of boredom.

Now, I want you to grab a blank piece of paper and a pen.

Now, begin by drawing 3 columns on your page.

List 1 of your situations that you’re hesitant about at the moment at the top of the page.

In the first column on your page

list all of the possible worst case scenarios that can eventuate from you pursuing this situation, person or event.

For example – if you’re fearful of entering a fitness competition the worst case scenario for you may be coming last or embarrassing yourself while on stage.

In the second column of your page

List all of the steps you can take and strategies you can implement to minimise each of these outcomes from occurring.

For example – by practising your posing regularly before the show you could eliminate the likelihood or embarrassing yourself on stage.

In the third column of your page

List all of the steps or actions you would have to take to return to where you were before you decided to (hypothetically) take action on this situation.

For example – if one of your biggest fears is quitting your job, and you actually decided to go through with this and your plan of starting your own business or travelling abroad fell through what would you need to do to return to the same (or similar) position/job?

Send out a few resumes? Attend some more recent training courses? Network with others in your industry?

When you honestly write down all of the above on paper, divided amongst your 3 columns you will soon realise that the worst case scenario really isn’t that bad.

Remember – ‘Many a false step was made by standing still’

What’s Your Take On These Spartan Habits? Let Me Know In The Comments Below!

Scott J.https://ignorelimits.com
I’m SJ. I’m a fitness enthusiast and published author. I transformed my body from a skinny fat 135lbs with 18% body fat to a solid 192lbs at 8% body fat. I became qualified in a field I was passionate about. I founded several online businesses that allow me to pursue ideas and projects in my life that I am passionate about without having to constantly worry about money. I published several eBooks explaining the training and dieting techniques I used to achieve the body I have today. I learnt a plethora of new information on dieting and fitness by reading and applying what I read, to find out what does work and what doesn’t work, because as I’m sure you’ve noticed the health and fitness industry is full of non-sense claims and BS. I found out what was true and what worked for me and applied that knowledge. And you bet I had fun during the whole process.
Previous article
How To Choose The Best Protein Supplement For You
Next article
The Adonis Index Ratio – The Formula For A Timeless Physique

What Are Pre Workout Supplements And Do They Work?

The Life-Changing Magic of Tidying Up (Summary)

5 Things You Need to STOP Doing In The Gym

Drop Sets Explained: How To Use Them To Stack On Size

5 Tips To Stay Motivated While Training At Home