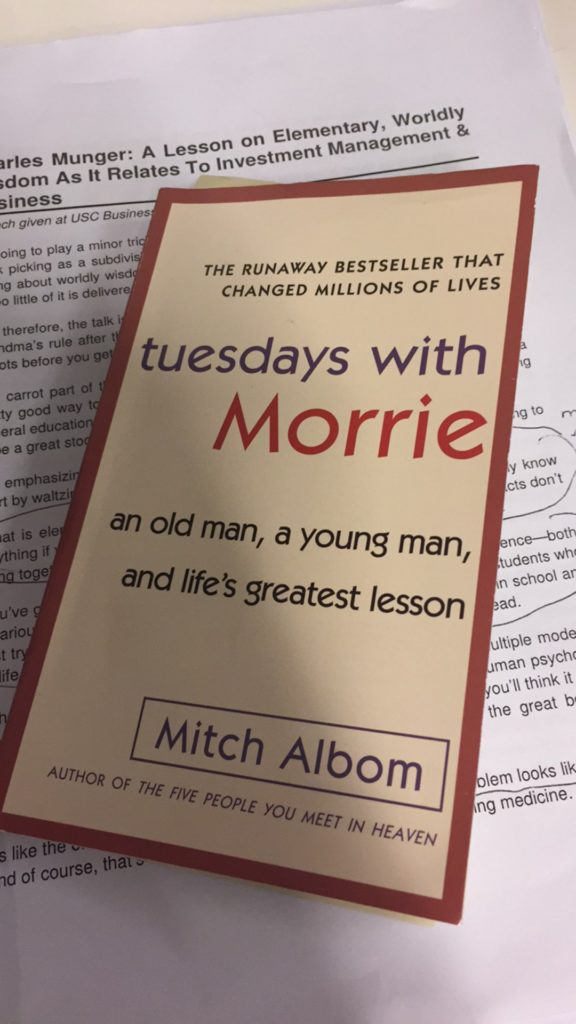 After hearing glowing praise about ‘Tuesdays With Morrie‘ from both friends and authors I stumbled upon a copy while waiting between connecting flights at an Indonesian airport.
A couple of hours spent reading and highlighting various passages and ideas throghout the book as I descended into Denpasar, Bali left me in agreement with the masses when it came to Mitch Albom’s book – the life lessons and ideologies from Morrie, the professor edging his way closer and closer to deaths door as the book reaches its final pages are more than worthy of the time and few dollars required to buy and read this classic.

Here’s What Morrie Taught Me…. 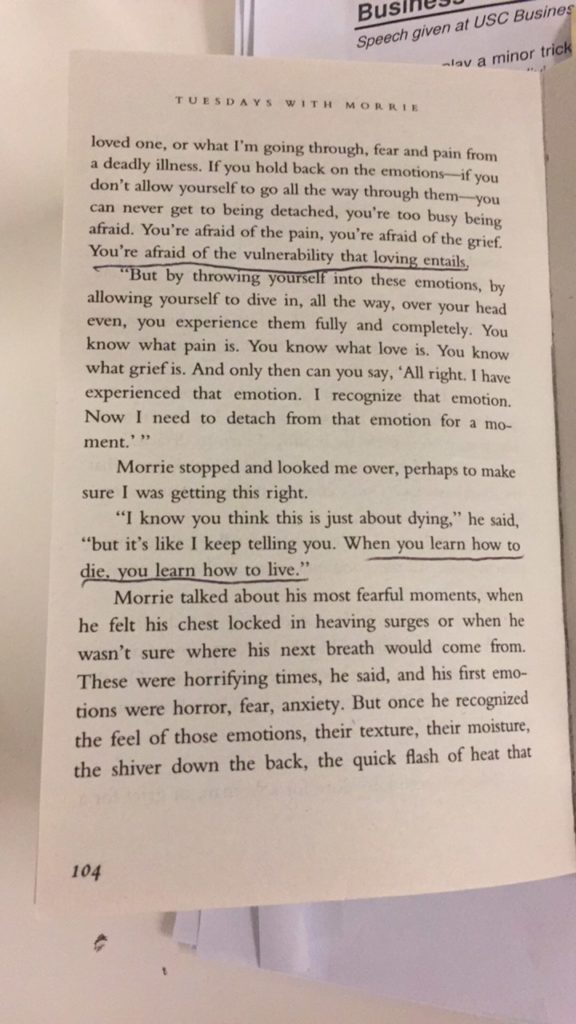 So many people walk around with a meaningless life, they seem as if they’re half asleep while they’re doing or chasing something deemed to be important.
These things very well may be important, but not to them – in essence they’re chasing the wrong thing. Meaning in life comes only through devotion to the right thing.
Create something for yourself and others that gives purpose and meaning and happiness will ensue.

When we experience pain or find ourselves struck by a proverbial storm of adversity we get hit by the 1st arrow, that’s a given.
It is what it is.

The 2nd arrow is your self-pity and wallowing, this is where the true damage is done.
Don’t allow the 2nd arrow to hit – as soon as you feel the 1st you get back up and get back to it, there’s people that’re far, far worse off than you are.

As Morrie says you must put a limit on your self-pity, you may spend a moment or two a day but you cannot go through life feeling self-pity.

Live In The Now

Photos, videos, social media posts… these are all a given when we’re experiencing something enjoyable or unique in this day and age.
Climbing a mountain? Many people will video the entire journey.
At a good concert? A large portion of those attending will be watching exclusively through the lens of their camera phone they’ve got glued directly in front of their face.

Photographs and videos, are a desperate attempt to steal something from death’s suitcase.

Don’t neglect the moment trying to capture  the moment.

We walk around thinking we have all the time in the world to perform trivial tasks that we don’t really want to do because we’re supposed to do them.
Once we know for a fact that death is coming, and it’s not far around the corner only then do we get our act together. Only then do we cull the trivial, only then do we trim the fat and remove the excess.

As Morrie said, the prospect of how close death was for him made him view life entirely differently, he focused down to the bare essentials.

The Hope For Younger Days Signifies A Live Unlived

As we age we begin to die, but by aging we come to terms with the fact that we’re going to die which leads to immense growth.

If you’re wishing to go back to when you were 20, 25 or 30 this is a sign that you still haven’t found your meaning, your true purpose in life.
When you’ve found meaning you will no longer wish to roll back the clock, you’ll want to go forward as with meaning you’ll want to see more, you’ll want to do more and you’ll want to get to it right away becasuse you’re conscious of your mortality.

Step Off The Hedonic Treadmill

Our happiness eventually evens out – we’re consumers and as such a new car will cause a slight, temporary rise in our happiness before it dips back down to its baseline.
What happens next? We crave that high once again. This is the hedonic treadmill, we’re forever running around looking for the next thing to give us that temporary boost as what we’ve got is all fine and dandy until our happiness returns to normal.

Human desires are like a bottomless bowl, whatever you pour in it doesn’t matter so much as it’ll always seem empty.

“People haven’t found meaning in their lives, so

they’re running all the time looking for it. they think the next car, the next house, the next job. Then they find those things are empty, too, and they keep running.”

Morrie himself was developing in a mindset and understand sense until the day he died.
Although his physical body had begun to deteroirate for some time he was constantly evolving, his situation turned him into a learning machine.

The lesson? If you haven’t found purpose today, if you don’t find purpose tomorrow… it’s never too late.

>>Get Your Copy of Tuesdays With Morrie Here<<