Three Simple Rules In Life
Every successful entrepreneur and athlete knows these three simple rules.
How do I know that? If they didn’t know and adhere to these three rules they wouldn’t be in the position they’re in today.

In order to climb to the top of the mountain, to reach society’s definition of success it’s imperative.

The man who complains he hasn’t reached his goal yet spends all evening parked on his sofa while putting his Netflix subscription through its paces does not abide to these three simple rules. 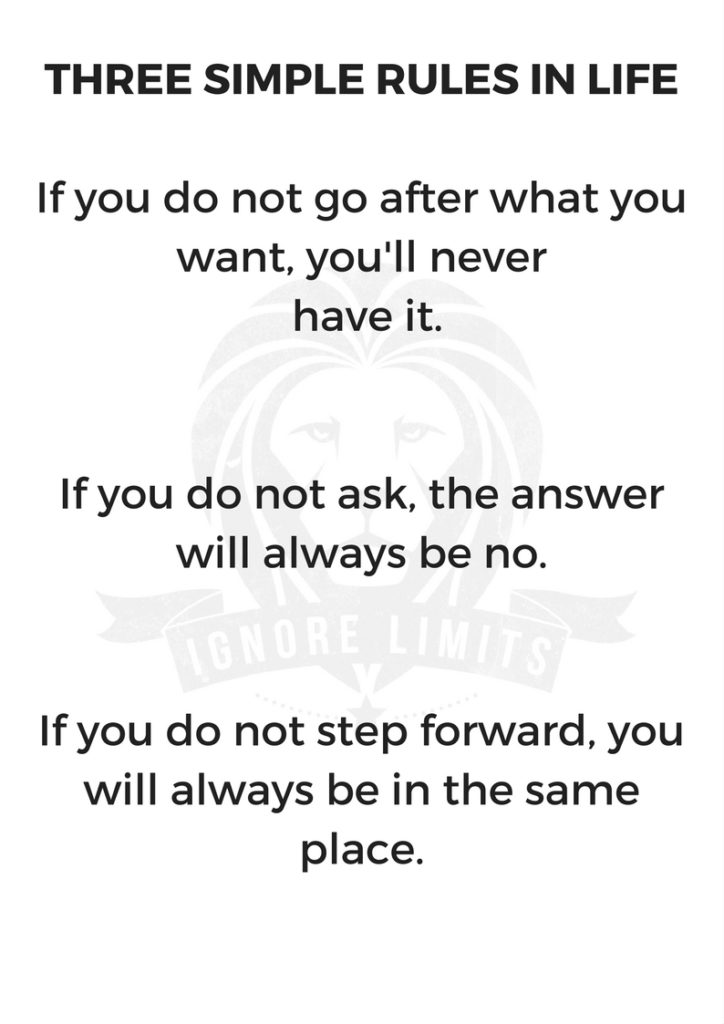 If you do not go after what you want, you’ll never have it.

If you want something be it a material possession or a skillset you’ve got to take action to get it.
A brand new Ferrari F458 Italia and the ability to do a handstand push-up aren’t going to magically appear at your front door while you sit on the couch and waste your days away.

If you want something you must go after it, this entails putting in long, hard hours of consistent work and practise.
This work must be specific to what you want, if you’re not doing the actions that’ll take you closer to the thing that you want then you’re wasting your time and expending your finite amount of energy foolishly.

See also
The Chains Of Habit

If you want to be a pro basketball player you better be spending your time on the court drilling instead of in the gym doing bicep curls.
Both are work, however only one is aligned with your goal.

Remember, if you don’t get after it someone else will, and when they reach their goal and attain the prize you have no right to be jealous or bitter.
They did what was necessary to acquire that in which they wanted.

You have the same opportunity. Start today.

If you do not ask, the answer will always be no.

Want feedback on your exercise form?

Want to shadow a mentor?

Want to get a discount on the car you’re bartering?

If you do not ask you do not get, persistence has been the key to great success and fortune for many, many men.
Jerry Weintraub was told ‘No!’ hundreds of times before he was able to take Elvis Presley on tour, then eventually that answer changed to ‘Yes!’. The rest is history.

If you do not step forward, you will always be in the same place.

Life will deal tremendous blows to you in the form of death of loved ones, loss of finances and entropy over time.

Prepare yourself, be ready to run the proverbial marathon that life may throw at you at any time!

You must have force of will and faith (feel success before you grasp it).

Preparation and expectation are key to overcoming adversity – when you’re expecting things they are not as dramatic.

When problems arise such as a concrete wall blocking your path you must innovate your way out, there’s always multiple ways such as:

Continue to step forward regardless of the success or failure you’re having.

Success can motivate some while it can make others content which leads to laziness.

Failure can motivate some to push forward while it can make others give up.

Step forward, one foot after the other and don’t stop. Pivot and make the necessary adjustments based on feedback as you go… but don’t ever stop!

What’s Your Take On These Rules? Let Me Know Below!

Scott J.https://ignorelimits.com
I’m SJ. I’m a fitness enthusiast and published author. I transformed my body from a skinny fat 135lbs with 18% body fat to a solid 192lbs at 8% body fat. I became qualified in a field I was passionate about. I founded several online businesses that allow me to pursue ideas and projects in my life that I am passionate about without having to constantly worry about money. I published several eBooks explaining the training and dieting techniques I used to achieve the body I have today. I learnt a plethora of new information on dieting and fitness by reading and applying what I read, to find out what does work and what doesn’t work, because as I’m sure you’ve noticed the health and fitness industry is full of non-sense claims and BS. I found out what was true and what worked for me and applied that knowledge. And you bet I had fun during the whole process.
Previous article
Concentrate On What You Are Doing
Next article
12 Cus D’Amato Quotes On Discipline, Winning & Fear

Stoicism And The Past, Future & Anxiety

3 BIG Benefits Of Cardio For Bodybuilding