What Is Parachute Training?

Parachute training is a quick, efficient and no BS method of increasing your explosive speed and agility.
Although it may sound complicated and expensive it’s quite the opposite! All you’ll need is 20 – 50m~ of open space for your sprints and a $10 nylon parachute!

Prowlers and sleds are fantastic ways to increase your speed and strength while getting in your cardio at the same time however most commercial gyms I’ve come across don’t have any of this equipment, and forking out hundreds of dollars for a sled and then finding a way to transport and use it is a whole other battle. Parachute running is a different story… 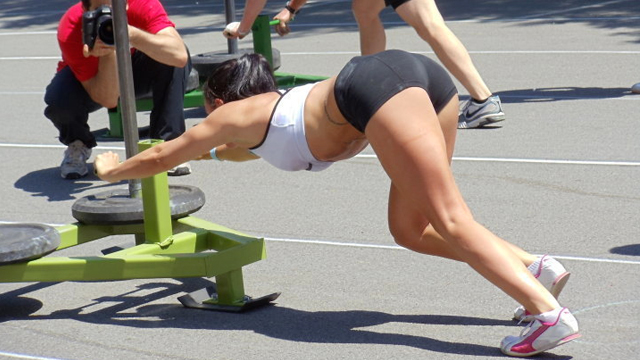 The purpose of the nylon parachute is to quickly fill up with air and create additional resistance as you sprint down the track – the faster you go the more drag the parachute will supply.
Although I’ve heard and seen these chutes being used for distances of 400m+ I have only used (and recommend) parachute sprints for short distance explosive bursts – using this style of training you’ll be able to easily incorporate parachute sprints into a HIIT (high intensity interval training) routine which has been proven time and time again to be far more efficient at fat loss and burning calories than the traditional steady state, slow and monotonous cardio.

Although a fairly new training aid, there have been studies performed on the merit of these speed parachutes. Science aside, this article is my take and my experience training with a speed parachute during my HIIT cardio sessions. 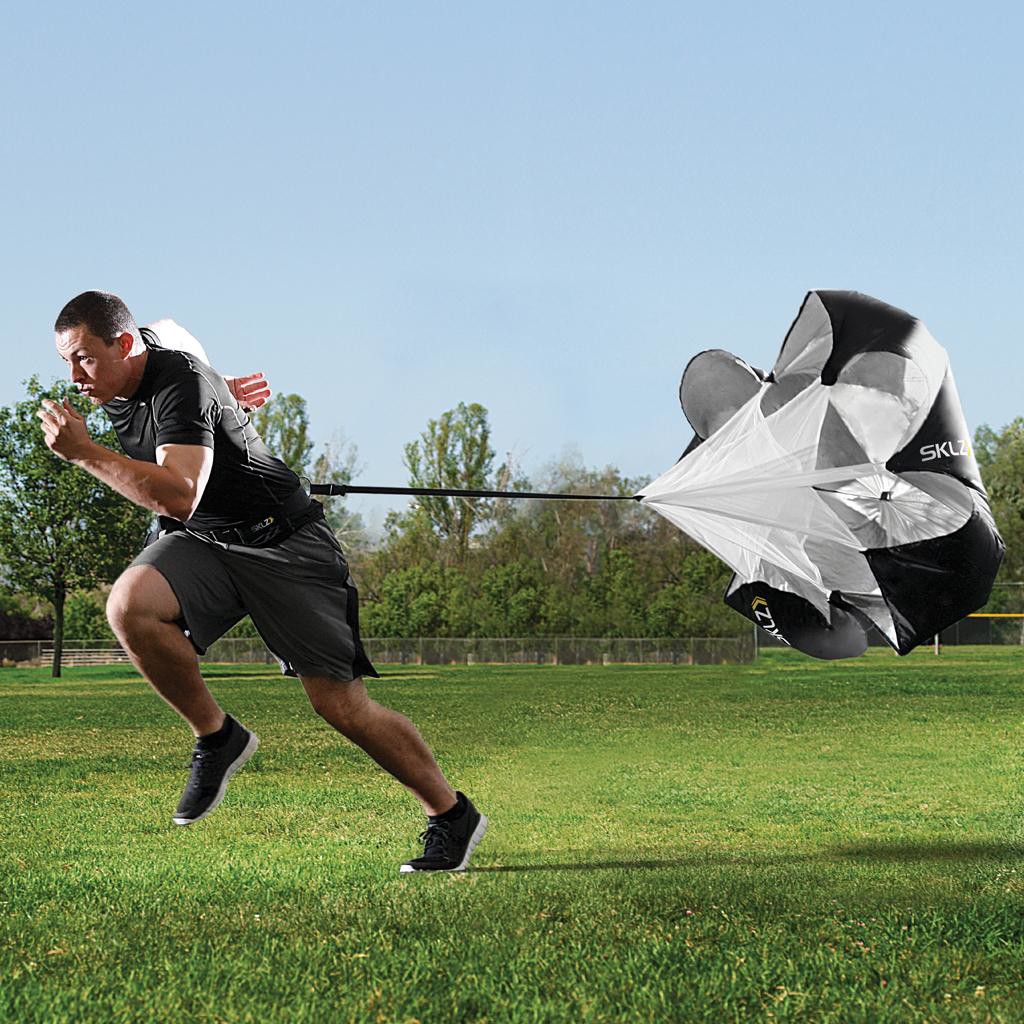 The benefits I’ve noticed since incorporating parachute running include…

My sprinting speed has increased over the last few months when I’m not using the chute, during this time my weight has stayed roughly the same… fluctuating a couple of pounds at most, I ensured I kept track of my weight during this time as if I continued to bulk/cut the difference in my body composition (amount of fat/muscle being held) could have skewed me drawing this conclusion.

Explosive power ‘getting out of the hole’

When it comes to squatting my weak point has always been the very first portion of the rep (at the bottom) this initial burst from the below parallel position is often called ‘the hole’ because it’s so damn hard to get out of when you’re lifting heavy. Once you’ve relentlessly driven your way through those first few inches of the rep it becomes that much easier – this is why the guys out there that are half-repping their squats are able to load such excessive amounts of weight on the barbell – the top 3/4 of the rep are easy once you’ve found your way out of the hole.

I didn’t notice this benefit at first, but since moving to a bigger (35lb) parachute my explosive power getting out of the hole on my heavy squats has improved – allowing me to continually progress where I was previously hitting a sticking point.

With the added resistance of a parachute your sprints are that much harder, like I said… the faster you go the more resistance the chute provides, this is known as progressive resistance.
I found when giving it my all on my parachute sprints I was consciously placing much more focus on HOW I was moving during these sprints i.e. the size of my strides, movement of my arms etc.

Now, this seems to be a bit of an uncommon opinion as prior to purchasing my parachute I did quite a bit of research and the biggest point (or negative) mentioned time and time again was the degrading of sprinting technique once a parachute comes into play because unlike a sled or prowler the resistance you’re facing is not distributed evenly across your body – the wind can direct the parachute further to the left or right resulting in over-compensation from one side of your body.

I’ve used my parachutes countless times and haven’t found this an issue, that said every time I’ve performed chute sprints there has been minimal to no wind.

A change of scenery

Parachute sprints are unconventional, sometimes a change of scenery is all you need to get that fire burning deep within your belly again! Slacking on your traditional cardio? Looking for something new, a bit of a challenge? I was and I decided to try parachute training and haven’t looked back. At first I was sceptical, assuming it was a fad and didn’t provide any tangible benefits until I did my research and found that many professional level sprint coaches recommend and train their athletes with speed chutes.

In terms of cardio I’m always mixing it up – parachute sprints are another simple and effective method to add to the pool along with plyometric circuits, tower runs, boxing circuits and jump rope. 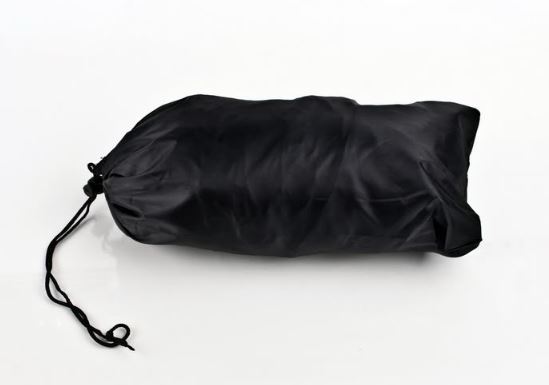 Unlike a prowler, sled or any other piece of resistance based cardio oriented equipment the speed chute is extremely portable.
A small sprint parachute folds up and is slightly bigger than your clenched fist, weighing in at around 2 lbs.

Leave your speed chute in your gym bag, take it overseas or on the road with you – the speed chute and the jump rope are in my mind the 2 most effective cardio apparatuses that are ultra-portable.
On the road and can’t get to the gym to do your cardio? There’s no excuses now.

Spartan Parachute Running Workouts To Get You Started

Sprint 50 yards with your speed chute, quickly stop and release your chute and sprint the remaining 50 yards resistance free.

Sprint 60 yards with your speed chute as fast as possible, rest for 30 seconds between sprints.

Sprint 100 yards with your speed chute as fast as possible, rest for 45 seconds between sprints.

After you’ve given these workouts a try why not design your own?
As I’ve mentioned the speed chute is best utilized for short, explosive distances – I like to keep my rest periods between sprints relatively minimal.
When opting for a longer rest period I’ll often through in an abdominal exercise such as leg raises or a plank too, nothing that involves raising the heart rate even further though as recovery is necessary between rounds.

What/Where Should I Buy A Resistance Parachute?

This all depends on your current level of conditioning and the resistance of the parachute you’d like to utilize in your training.

Nike and a number of reputable companies have delved into offering speed chutes, however I haven’t found the price of a name brand justifiable over the generics as having used both I’ve noticed very little difference. 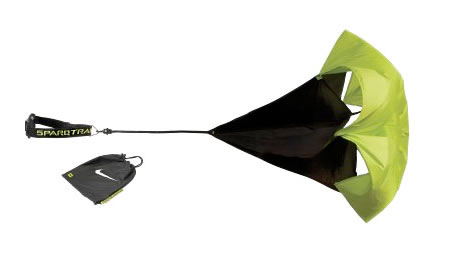 You can pick up a resistance parachute for your parachute running here.

Have You Tried Parachute Running Before? Let Me Know In The Comments Below!