4 Lessons From McGregor Vs Diaz 2

5 Lessons From McGregor Vs Diaz 2 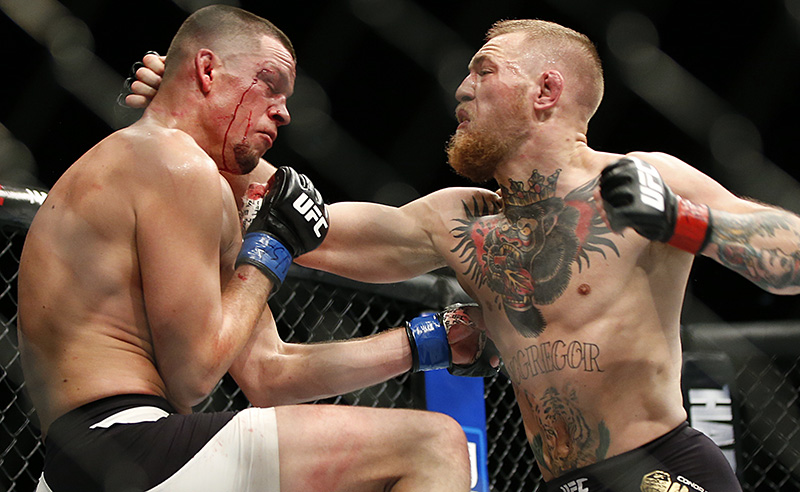 People are still talking about it, and whether you’re a fan of Nate Diaz, the man from Stockton who waas expected to no future due to the town he grew up in or the elusive Pride of Ireland, the Notorious and up until his last bout with Diaz the ‘untouchable’ Conor McGregor it was one hell of a fight.

Both men left it all in the octagon, with numerous attempts to put each other away.

McGregor stole the show and avenged his last (and only) defeat in the UFC by beating Diaz 3 rounds to 2.

Many will look at this and merely see a physical fight, but there’s much, much more to it.

Looking at body language, facial expressions and the road from McGregor’s loss at UFC 196 up until the time the octagon door re-opened and his hand was raised victorious there’s a number of lessons we can take away from it all.

Here Are 4 Life Lessons From McGregor Vs Diaz 2

Your Strategy Only Works Until It Doesn’t Work (Pivot!)

McGregor sped through the featherweight division in the UFC with his straight left hand.
“No one can take that left hand shot!” he exclaimed time and time again, knock out after knock out his competitors crumbled, one after the other after he was able to inevitably land that powerful left hand precisely on the chin of his adversary.

Until Nate Diaz came along.

Conor spent the entire first round of his first fight with Nate Diaz attempting to overload and land that left hand, and when he did, Diaz walked straight through it. In a panic McGregor continued to try and put Diaz away with his famous left hand blow, which ended up costing him the fight.

Distractions Will Be Your Downfall

Going into his first fight with Nate Diaz, Conor McGregor wasn’t focused.
Driving around Las Vegas in expensive cars, trash talking his opponent on numerous talk shows and interviews, not to mention his interactions with the crowd come fight night.

McGregor was distracted because McGregor was expected to win.
McGregor expected himself to win.
The Vegas odds were vastly in McGregor’s favour, the people expected McGregor to win.

Distraction was his downfall.

Focus on one thing.
Focus on the task at hand.
Focus on your adversary.

Don’t Go By ‘How You Feel’, Stick To A Schedule, Have Structure

When it comes to training, be it in the gym, on revision for a test or for your next professional bout in the octagon structure is key.

Training ‘when and how you feel’ doesn’t work because how and when you feel is always different.
There’s no structure.
There’s no set in stone time, workload or duration.

In ‘Win Or Learn’ by Coach Kavanaugh, McGregor admits during his preparation for his first fight with Nate Diaz at UFC 196 he trained when he pleased and for however long he pleased. Quite often McGregor, his coach and training buddies would roll into the gym at midnight with no set plan in place.

McGregor’s training camp for his rematch with Diaz at UFC 202 was the most structured training regime he’d ever followed.

Re-watching their first bout it’s clear as day that before Nate Diaz physically broke McGregor via a rear naked choke he broke him mentally.

he landed shot after shot and the tall lanky southpaw that is Nate Diaz was right back in his face.

McGregor mentally broke and he essentially forfeited the fight.

McGregor was prepared, he knew what he was going to be facing.

Both men were standing until the final bell rang…

What’s Your Take On McGregor Vs Diaz 2 And These Lessons?

Scott J.https://ignorelimits.com
I’m SJ. I’m a fitness enthusiast and published author. I transformed my body from a skinny fat 135lbs with 18% body fat to a solid 192lbs at 8% body fat. I became qualified in a field I was passionate about. I founded several online businesses that allow me to pursue ideas and projects in my life that I am passionate about without having to constantly worry about money. I published several eBooks explaining the training and dieting techniques I used to achieve the body I have today. I learnt a plethora of new information on dieting and fitness by reading and applying what I read, to find out what does work and what doesn’t work, because as I’m sure you’ve noticed the health and fitness industry is full of non-sense claims and BS. I found out what was true and what worked for me and applied that knowledge. And you bet I had fun during the whole process.
Previous article
GOMAD Diet FAQ – Read This Before You Drink A Gallon Of Milk A Day
Next article
Ego, Your Enemy In The Gym

How To Target Your Inner Biceps To Build Big Arms

How To Get Motivated To Go To The Gym

4 Compound Dumbbell Exercises You Need To Add To Your Routine