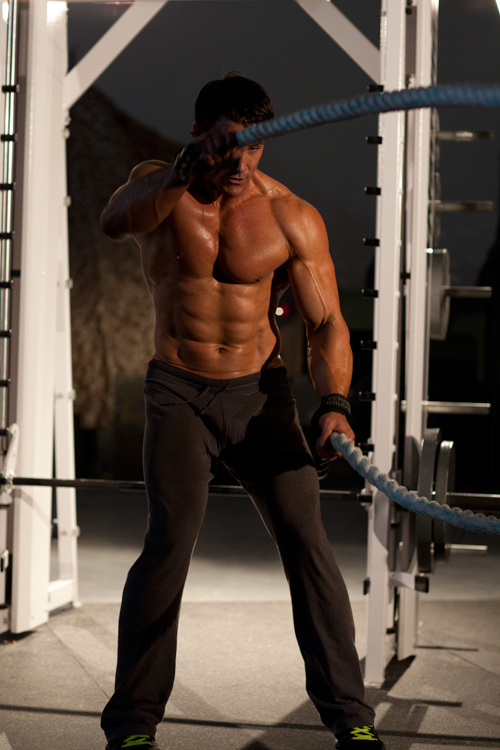 Bring On The Battle Rope

The battle rope is an underrated, unconventional piece of training equipment.
Training with battling ropes is both physically and mentally challenging, burns a ton of calories and builds fantastic functional strength and endurance…

A few years ago I dismissed the battle rope as a fad piece of CrossFit equipment… how wrong I was! Instead of spending hours running on the treadmill or sprinting up and down stairs give this engaging, low impact form of cardio conditioning a go!

Not sure where to start with battle ropes? Read this post and you’ll be on your way.

Regardless of whether you’re an athlete, a casual gym-goer or a bodybuilder, battle ropes have many benefits for you! 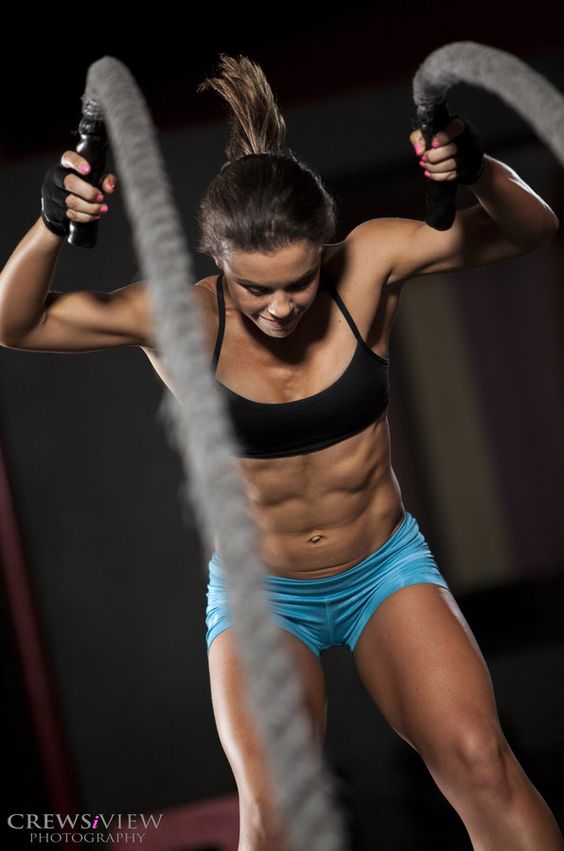 Most forms of HIIT cardio are relatively high impact… stair sprints, jump rope, plyometric circuits. These all involve jumping, leaping and bounding – which when performed consistently can place a large amount of stress on the joints. During my last cutting phase I discovered the battle rope as I simply couldn’t sustain performing 3 sessions of high impact cardio a week ontop of my lifting regime.

This is where the battle rope shines, the common, effective battle rope exercises such as the double wave, alternating wave and slam are low impact, there’s no pressure or jarring on the joints which means battle rope workouts can be used as a sustainable form of cardio that won’t leave you out of the gym due to recovery issues.

It’s not until you start training with battle ropes that you realize just how hard they hit the entire body!
Basic movements like the battle rope wave will have you utilizing your shoulders, arms, core and legs for stability.

The goal of battle rope exercises is to explosively move the rope at speed, using your shoulders, arms as well as your core – this fast exertion utilizes and builds explosive power.

As the battle rope wave and slam are functional movements this explosive power can transfer across to other exercises, sports such as basketball and baseball as well as MMA.

Studies time and time again have proven that HIIT (high intensity interval training) burns far more calories than prolonged steady state cardio.
Medicine ball slams, when performed in a HIIT or circuit style workout can burn hundreds of calories, provided you’ve got your diet in check the calorie deficit that your battle rope exercises  places you in will be enough to burn fat.

If you spend all day working in an office or focus solely on isolation exercises in the gym chances are your mobility could do with a bit of work.
Since I’ve been performing battle rope drills regularly I’ve found my shoulder and squat mobility has increased.

The constant dynamic movement of the shoulders during alternating waves and slams loosens up the shoulders which can translate into better posture and increased range of motion on exercises such as the military press.

When increasing the difficulty of your battle rope workouts and adding in lower body movements such as the reverse lunge and jumping squat flexibility and mobility in your legs (particularly hamstrings for me) improves.

Note: If you’re regularly foam rolling, performing hip flexor stretches or shoulder dislocations each day you probably won’t experience this benefit. If you’re an office worker or don’t emphasis your compound movements you’ll find an increase in mobility quite apparent!

In order to lift the battle rope over head and slam it back down to the ground while maintaining your position a surprisingly large amount of core strength is required. As we’ve discussed in order to get six pack abs core strength is irrelevant, it’s all a matter of body fat. That said increasing your core strength does have its benefits! Before I regularly performed exercises such as hanging leg raises, planks, ball slams and battle rope waves I found my core stability on my squat and standing military press to be the point of failure – my core was shaking and I struggled to stay upright and maintain my position when lifting heavy weight (I had a tendency to want to fall forward).

After I increased my core strength this is no longer the case.

Conventional cardio is mind numbing and boring as hell.
Spending any amount of time over 15 minutes on a treadmill or cross-trainer is a dimly lit sucks, especially when you’ve got other options!

Battle rope workouts are great when performed outside – all you need is your rope, mental intensity and a tree or pole to wrap your battle rope around.
It comes to me as no surprise that the battle rope is a staple for most personal trainer’s boot camps – it’s a fun, engaging workout for their clients that can be performed with an endless amount of variations just about anywhere.

There’s a handful of exercises out there that burn like no other, the dumbbell lateral raise is one of the most challenging exercises to push through mentally along with the battle rope wave. Not only are these exercises fantastic for shoulder development and obliterating calories they’re also a fantastic builder of the mind. Setting a number of repetitions, rounds or time frame you’re going to smash away at the battle rope for and pushing through the immense burn is character building… perform one of these workout early in the morning and whatever else you face that day will be trivial by comparison.

Never used a battle rope before? Start with these variations…

Time to get started with the basics! The double wave is the perfect starting point. 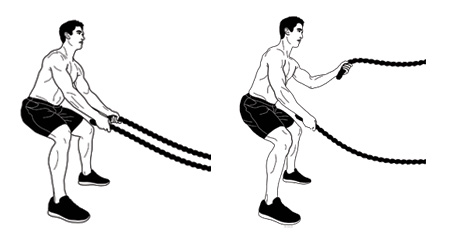 Stand facing the rope with feet shoulder-width apart.
Grasp one end of the rope in each hand so that your palms face each other.
Bend your knees slightly, tense your core, and proceed to move both arms up and down rapidly at the same pace, creating waves.

Time to alternate those arms!
Stand facing the rope with feet shoulder-width apart and knees slightly bent.
Hold one end of the rope in each hand so that your palms face in.
Raise one arm to shoulder level and then quickly lower back to the starting position, as you do this raise the other arm to shoulder height.
Continue on with the rhythm as fast as possible.

Training for explosive power? This one is for you…

Here’s one for the athletes! 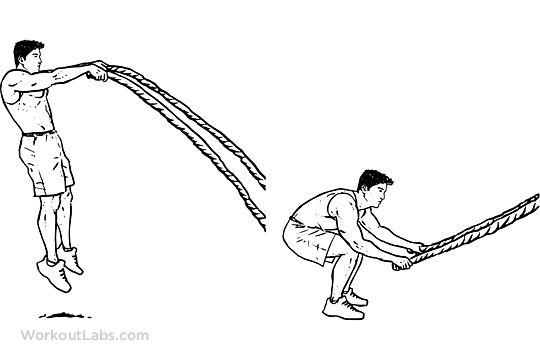 Get started with feet hip-width apart and hold the ends of the rope in each hand.
Bring both arms overhead.
Use your power to slam the ropes down to the ground, lowering into a squat as you do.
Straighten and repeat. 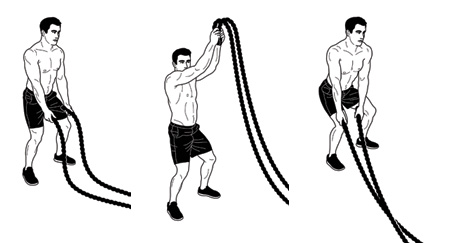 Burn calories & challenge the mind with upper/lower combinations such as…

Mastered the wave and the alternating wave? Time to take it to the next level.
Start performing the alternating wave.
Step your right leg back into a reverse lunge, and then jump up into the air, switching legs so that you land with your left leg extended back.
Maintain a high position with your head and chest and continue with strict form.

Start performing the alternating wave.
Once in rhythm with your waves jump up into the air.
Land in a squat position while continuing your fluid wave motion throughout the jump squat.
Repeat for as many repetitions as required.

Use a timer, perform constant drills and rest for predetermined intervals.

Set a timer for 5, 10 or 15 minutes and perform as many rounds of a sequence or series of sequences within this time frame.

With your training buddy take it in turns completing a set of battle rope waves or slams. Go for rounds/time.

Create a circuit utilizing the battle rope along with other functional speed/explosive movements such as the jump rope and box jump.

What’s Your Take On The Battle Rope? Let Me Know In The Comments Below!

Scott J.https://ignorelimits.com
I’m SJ. I’m a fitness enthusiast and published author. I transformed my body from a skinny fat 135lbs with 18% body fat to a solid 192lbs at 8% body fat. I became qualified in a field I was passionate about. I founded several online businesses that allow me to pursue ideas and projects in my life that I am passionate about without having to constantly worry about money. I published several eBooks explaining the training and dieting techniques I used to achieve the body I have today. I learnt a plethora of new information on dieting and fitness by reading and applying what I read, to find out what does work and what doesn’t work, because as I’m sure you’ve noticed the health and fitness industry is full of non-sense claims and BS. I found out what was true and what worked for me and applied that knowledge. And you bet I had fun during the whole process.
Previous article
Lessons From Conor McGregor & Nate Diaz At UFC 196
Next article
Medicine Ball Slams – The Ultimate High Results, Low Impact Cardio Workout!

How To Increase Your Productivity With Intermittent Fasting

Dumbbell Back Workout: Building A Big Back With Dumbbells