Arnold Schwarzenegger’s life is one of the most motivating things to read and see, the Austrian oak has conquered just about every endeavour he has attempted, from the stage of the Olympia, acting in Hollywood blockbusters to the office of politics. Arnold has a number of other achievements that aren’t common knowledge (for example the millions Arnold made from property investment before he even got started with his Hollywood career) unless you’ve read his biography, Total Recall.

These are Arnold’s 6 rules for success in life.

Notice a common theme among Arnold’s 6 rules for success?

They all revolve around YOU, what YOU want to do, what YOU think you can do and setting out to find a way that YOU can do it… Arnold would not have reached the echelon of success if he listened to what his parents told him, what the majority of his friends told him, what the average men in society told him he could and couldn’t do. His dreams would’ve been shot dead in the water if this were the case. 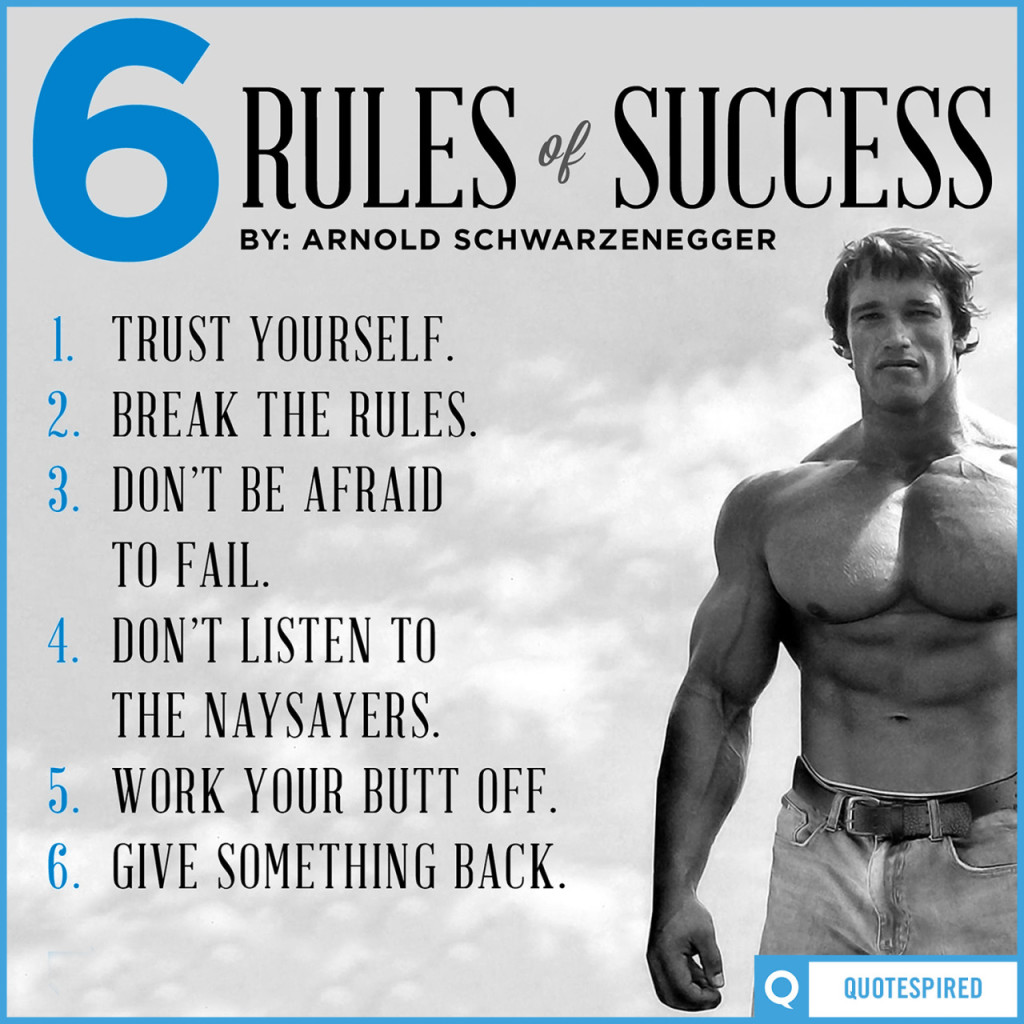 “What’s the point of being on this earth if all you want to do is be liked by everyone and avoid trouble? The only way I ever got any place was by breaking some of the rules”

DON’T BE AFRAID TO FAIL

“Anything I ever attempted I was always willing to fail. You can’t always win but don’t be afraid of making decisions. You can’t be paralyzed by fear of failure or you will never push yourself”

“How many times have you heard that you can’t do this and you can’t do that and it’s never been done before… I love it when someone says that no one has ever done this before because when I do it, that means I am the first one that has done it”

“Work your butt off. No one has ever been successful without working hard. There are no shortcuts. Work like hell an you’re going to make it”

“Whatever path you take in life, you must always find time to give something back… reaching out and helping people will bring you more satisfaction than anything else you’ve ever done”

What’re your thoughts on Arnold Schwarzenegger’s 6 rules for success? Is there anything you’d add or anything experiences you can relate to these rules?

Let me know in the comments below!

Scott J.https://ignorelimits.com
I’m SJ. I’m a fitness enthusiast and published author. I transformed my body from a skinny fat 135lbs with 18% body fat to a solid 192lbs at 8% body fat. I became qualified in a field I was passionate about. I founded several online businesses that allow me to pursue ideas and projects in my life that I am passionate about without having to constantly worry about money. I published several eBooks explaining the training and dieting techniques I used to achieve the body I have today. I learnt a plethora of new information on dieting and fitness by reading and applying what I read, to find out what does work and what doesn’t work, because as I’m sure you’ve noticed the health and fitness industry is full of non-sense claims and BS. I found out what was true and what worked for me and applied that knowledge. And you bet I had fun during the whole process.
Previous article
The 300 Workout Routine – Test Your Speed, Strength & Mindset
Next article
7 Stretches In 7 Minutes For Complete Lower Back Pain Relief

How To: Standing Dumbbell Shoulder Press

How To: Tate Press

Building Muscle – Paralysis by Over Analysis