How To: Plate Front Raise

Plate Front Raise
The plate front raise and all of its variations are fantastic for building up the anterior (front) of the deltoid.

If you want those round, cannonball style shoulders this is one exercise you cannot afford to neglect!

I recommend hitting the front raise after performing several sets of overhead press and side lateral raises during your shoulder workout.

Grasping a weight plate with both hands and stand straight with palms facing towards your body with a slight bend in your knees.

Maintaining your straight position proceed to raise the plate in front of you with a slight bend in your elbows.

Raise the plate until it’s at head height before holding for one second at the top of the repetition.

In a slow and controlled manner lower theplate back down to your side and proceed for the desired number of repetitions. 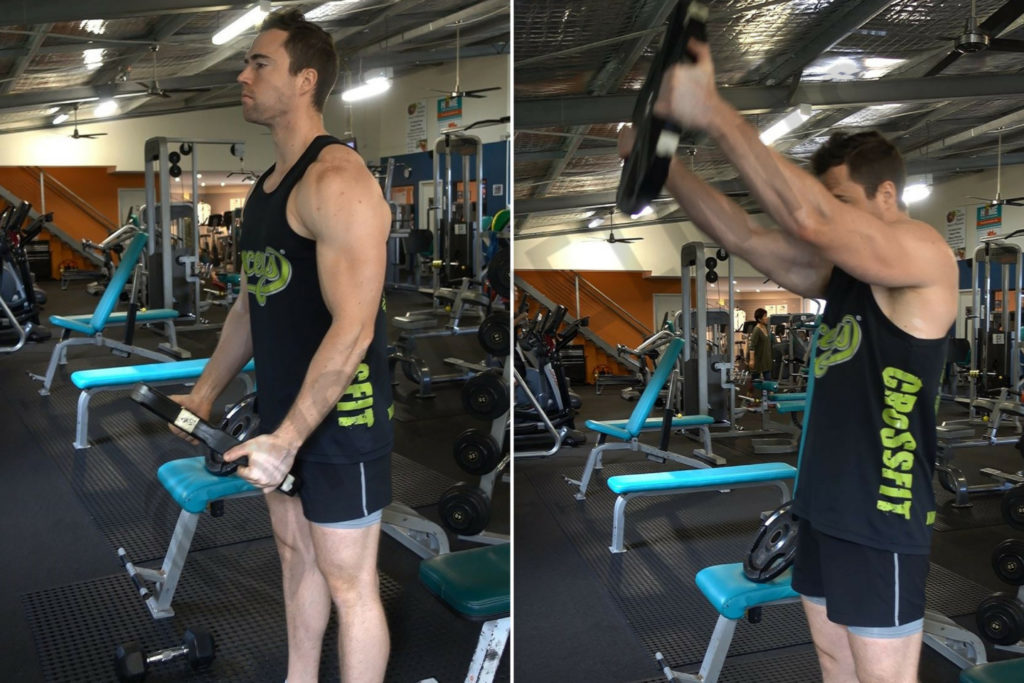 The seated front raise with dumbbells is a great way of eliminating any potential swinging or use of momentum often apparent when performing the standing dumbbell or barbell front raise.

The barbell or dumbbells should be raised until they are at face level before being lowered down until your arms are fully extended in front of you.

Any Questions Regarding The Plate Front Raise? Ask Below!

Scott J.https://ignorelimits.com
I’m SJ. I’m a fitness enthusiast and published author. I transformed my body from a skinny fat 135lbs with 18% body fat to a solid 192lbs at 8% body fat. I became qualified in a field I was passionate about. I founded several online businesses that allow me to pursue ideas and projects in my life that I am passionate about without having to constantly worry about money. I published several eBooks explaining the training and dieting techniques I used to achieve the body I have today. I learnt a plethora of new information on dieting and fitness by reading and applying what I read, to find out what does work and what doesn’t work, because as I’m sure you’ve noticed the health and fitness industry is full of non-sense claims and BS. I found out what was true and what worked for me and applied that knowledge. And you bet I had fun during the whole process.
Previous article
How To: Pull-Ups
Next article
How To: Pec Deck Fly (Butterfly)

Monk Mode: The Path Of The Ultimate And The Keys To Self-Mastery Review

5 Life Changing Lessons I Learnt From an Elite Navy Seal

How To: Side Plank

How To: Dumbbell Deadlift

10 Cheap Muscle-Building Foods You Need In Your Diet