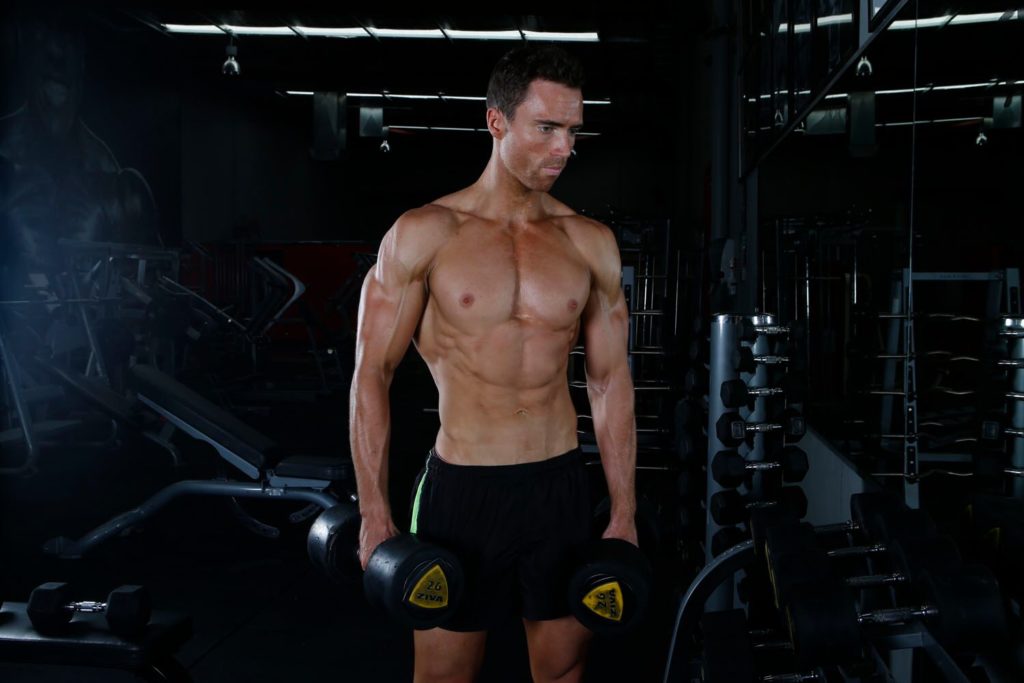 When it comes to building big biceps 99% of guys in the gym rely on variations of the dumbbell and barbell curl.
When their arm routine doesn’t yield the results they expect they simply add in an extra biceps curl variation or two…

If you want big biceps you MUST work on your chin ups!

the chin up is often neglected and forgotten as it’s deemed to be largely a back exercise… hit your chin ups for biceps with strict form and you’ll be surprised as to how effective it can be as an arm day staple exercise.

Don’t have a resistance band? Jump up onto the bar and perform slow negatives!

Regardless of your current strength and ability there’s a chin up variation you can perform. No excuses.

The only way to get better at chin ups is to do them! Don’t skip pull-ups simply because you find them a struggle (I recall repping out sets of weighted dips with a 45lb plate before I could even perform 1 proper chin up so don’t get discouraged!).

With Arms fully extended and slightly inside shoulder-width grasp your pull-up bar and assume a dead hang position with palms facing towards you.

Tilt your head to look slightly upward and maintain a small arch in your back, this will create the slight angle you’ll maintain in your torso for the duration of the set.

Drive your arms down and back, pulling through your back and biceps until your chin clears the bar (ideally reaching chest height with the bar).

Squeeze the biceps and hold the contracted position at the top of the rep for a second.

Slowly lower yourself back down to the dead hang starting position.

Repeat for the desired number of repetitions with this full range of motion.

If you’re struggling to perform bodyweight chin ups I recommended performing assisted chin ups with a resistance band (hook the band to your foot and loop it around the bar for some assistance).

If you’re able to perform in excess of 10 bodyweight chin ups I recommended increasing the resistance and adding a weight belt with a 45lb plate.

Perform a regular bodyweight chin up but instead of holding the contraction for a second at the top of the repetition opt to hold each contract for 10 seconds.
You’ll likely only be able to perform a few reps per set doing these isometric holds but they’re a fantastic way to burn out the biceps and build core strength.

We’re able to manage more weight on the negative portion of exercises, therefore if you cannot perform a bodyweight chin up opt to jump up and assume the top contracted position of a chin up, then slowly begin to lower yourself down until your arms are at a dead hang. Jump back up and repeat for reps.
This is how you’ll ultimately build the strength to start doing chin ups for biceps.

Ensure you’re maintaining a slight arch in your back, if your torso is straight you’re going to end up hunching forward and will not be able to master the full chest to bar range of motion, ultimately resulting in an inferior contraction at the top of each repetition.

Once you’re able to hit 8 – 10 bodyweight chin ups don’t settle there! Growth comes via progression overload.
Progression overload requires the tension on the targeted muscle to be increased – this means adding a dumbbbell between your legs or a weight belt with a 45lb plate around your waist.

Not Holding The Contraction

There’s no reason to rush your chin ups as you’re limiting tension on the biceps if you’re speeding through your reps.
Maintain a controlled pace and hold your contraction for a second on each rep.

Any Questions Regarding Chin Ups? Ask Below!