What If Never Went To The Arena

We learn from failure, failure can teach us lessons we’ll never forget, if you’ve chasing hefty goals chances are you’ve failed before – if you get back up and try again you’re ahead of the pack, at least 90% of people give up after hitting their first roadblock or their first temporary failure (remember, failure is only permanent if you quit there and then).

Listening to a workout mix of mine on the way to the gym an old Greg Plitt quote caught my attention and resonated with me.

“I failed is ten times more of a man than someone who says what if, cause what if never went to the arena”

You won’t always win first place, there’s always going to be someone out there stronger than you, leaner than you or faster than you. No problem.

The horrific thing is when this is used an excuse to throw in the towel before you’ve even begun. You may not think that way now, or in the not-so distant past because you brushed off an opportunity or chose not to pursue an ideal that you were considering…

is the one question you do not ever want to be left asking yourself.

This applies to literally any scenario…

Attempting to break your 1 rep max personal record on squats

Leaving the safety net of the 9 – 5 fixed income to set out on an entrepreneurial adventure, chasing your dream

Travelling abroad for a semester or to work for a year 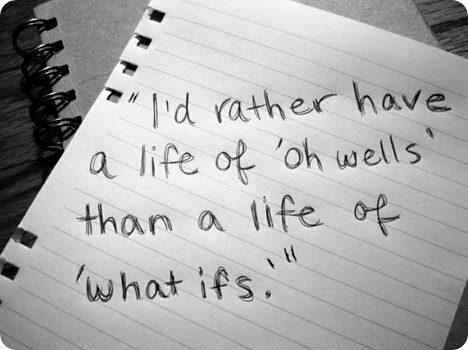 You just updated your resume, gained practise writing a cover letter and overall experience applying for future (similar) jobs, perhaps you even got some feedback on where you went wrong.

If you failed on that squat 1RM you would’ve lowered the bar down to the safety rails, identified which part of the lift you got stuck on in order to determine which muscle groups need further development to ensure it doesn’t happen again.

The girl turns you down politely with an excuse that she has a boyfriend or similar, perfect. You’ve now realized that rejection isn’t that scary and you’re one step closer to overcoming approach anxiety. Next time it’ll be easier.

See also
Define your Fears, Not your Goals (a lesson in stoicism)

Your start-up business doesn’t gain traction and you run low on funds – you’ve got experience in an industry and can easily return to a similar job if need be (I wouldn’t though, I recommend you burn your boats).

You travel and the foreign destination isn’t as exciting as you imagined, no big deal – you gained life experience and met a plethora of interesting people along the way. You now have stories to tell unlike those in your hometown stuck in the same Monday – Friday repetitive loop.

In my eyes that’s the worst that can (realistically) happen in each of the above situations. Being pessimistic.

The worst thing is what happens when you decide to continually make excuses, brush it off and then fail to even try.

In Becoming A Lion Among Sheep embracing failure is one of the Success habits I discuss, I’ve failed time and time again.

The funny thing is though I don’t remember any of those individual failures, they didn’t have any lasting monumental impact. I learnt or I pivoted and then succeeded.

Remember, “I failed is ten times more of a man than someone who says what if, cause what if never went to the arena”

Scott J.https://ignorelimits.com
I’m SJ. I’m a fitness enthusiast and published author. I transformed my body from a skinny fat 135lbs with 18% body fat to a solid 192lbs at 8% body fat. I became qualified in a field I was passionate about. I founded several online businesses that allow me to pursue ideas and projects in my life that I am passionate about without having to constantly worry about money. I published several eBooks explaining the training and dieting techniques I used to achieve the body I have today. I learnt a plethora of new information on dieting and fitness by reading and applying what I read, to find out what does work and what doesn’t work, because as I’m sure you’ve noticed the health and fitness industry is full of non-sense claims and BS. I found out what was true and what worked for me and applied that knowledge. And you bet I had fun during the whole process.
Previous article
How To Cut Without Losing Muscle And Strength
Next article
The Best Back Exercises for Mass – Build A Badass Back!

Training Through Injuries & How To Adapt

How To Make Your Own Pre Workout Supplement At Home

The Deserve It Factor

How To: Standing Dumbbell Shoulder Press

How To: Dumbbell Triceps Kickback

How To: Dumbbell Floor Press