So, You Want To Increase Your Vertical Jump? 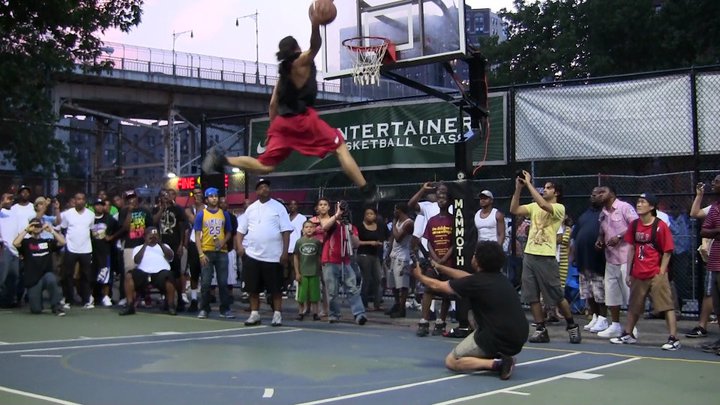 Whether you’re looking to increase your vertical jump for a particular sport or just as a new challenge to break up a bodybuilding style regime training the vertical jump and implementing techniques to build that explosive movement is great fun.

Many gym-goers go the wrong way when it comes to increasing their vertical jump, spending all day practising the vertical jump itself and not performing any accessory work in terms of exercises or mobility in order to improve it.

This is the biggest misconception when it comes to increasing your vertical, jumping over and over again isn’t the way to do it.

An impressive vertical jump requires immense explosive power and great mobility, it’s a great test of strength in relation to your bodyweight.

If you’re not warming up correctly or performing mobility drills at least every other day you’ll find your range of motion to be less than desirable and your movements will not be fluid.

My form and range of motion on the days I spend that little bit of extra time in the morning foam rolling my lower body and performing a few dynamic stretches is much better than the days that I find myself strapped for time and result to a neglected warm-up.

In order to dial in your vertical jump, and any form of squatting movement foam rolling the lower body and emphasizing your hip flexors and ankle mobility is key.

Check out the 3 short demonstrative videos below for a complete lower body mobility guide.

The foam roller is your friend

The depth jump focuses on increasing reaction time and firing the correct muscles to get that explosive air time required for a big vertical jump.

In order to perform the depth jump step off a small box and explode upward with both legs as soon as you touch the ground. Upon landing take a moment, then step back and repeat from the step off again.

When training for a big vertical jump the standard box jump is often utilized, however the depth jump is too often neglected even though it’s arguably a better exercise to increase your vertical jump.

Explosive Movements (The Front & Back Squat!)

let’s take a minute to discuss the two very different variations of the back squat: the differences in techniques and what effects have on a lifter’s musculature.  Often dubbed the king of all lifts, the squat in general has tremendous impacts on all the major muscle groups in the human body, not just the hamstrings and quadriceps.  The low bar and high bar variations of the squat target and utilize nearly the same muscles, but shift the balance from the posterior and the anterior chain. 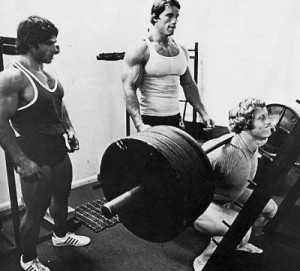 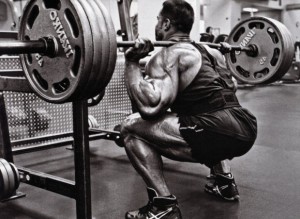 I’m going to start with the high bar squat because this the one seems to be the one most people think about or default to when squatting for the first time.  This is also called the Olympic Squat because this is the variation that weightlifters use with immaculate form.  The high bar squat is named so because it is placed higher on the back than the low bar squat.  The barbell is rested on top of the trapezius muscle that spans laterally to the shoulder blades and creates a cushion of muscle.

The bar in the this position shifts the center of gravity more to the front of the body than in the low bar position so although the posterior chain (glutes and hamstrings) is doing a lot of work, the anterior chain (quadriceps) are now also activated a lot more than in the low bar variation.  It’s important to realize that the center of gravity is still over the middle of the foot even though the bar is closer to the front of the body.  The back, when squatting down will be in a more upright position and the chest higher and at a more vertical angle than when low bar squatting.  Keeping the chest up and open requires a strong upper back and abdomen.

The shelf created by the traps is ultimately the only thing that needs to hold the bar in place.  The hands are placed under the barbell and brought in close together to contract the upper back and create a good cushion of muscle that the bar can rest on.  In the case of the high bar squat, the hands stay under the barbell although they don’t support any of the weight unless you’re starving for some elbow tendonitis.  A good place to have the bar on your hand is close to the thumb and wrist rather than the fingers.  Thumbs are wrapped around the bar and elbows are pointed down.

The high bar squat may position the feet closer to the body than the low bar squat, but still around shoulder width apart (it really depends on the lifter – how long their tibias and femurs are).  The hips don’t travel back like in the low bar squat but rather try to fall directly down and finish right between the heels of the feet.  The knees will travel forward a lot and end up past the toes.  This will allow for greater depth and a longer range of movement than low bar squat. 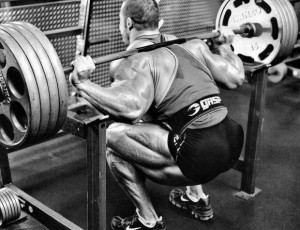 Whereas the high bar squat is synonymous with Olympic weightlifters, the low bar squat is synonymous with powerlifters.  The low bar squat is, if you picked up on it by now, named this way because it is placed lower on the back than the high bar squat, but not by much.  The barbell is places on top of the posterior deltoid, in a horizontal groove made by the scapula that is directly located between the top of the posterior deltoid and the trapezius muscles.  Sometimes this can be very difficult to locate, so you may need to practice with a broomstick until you can find the perfect groove that allows the bar to fit comfortably.  I’ve provided some and pictures that will help as well.

Since the low bar squat is located lower on the back, this means that the back can be more horizontal in order to both keep the center of gravity over the middle of the foot and to create a more stable shelf so that the bar does not slide down the back.  The low bar squat depends heavily on the posterior chain, in which hip drive is most important in order to start the movement from the bottom position.  With a greater use of and dependence on the posterior chain, one can lift considerably more raw weight than with the high bar squat.

The low bar squats requires flexible wrists and shoulders because of how the bar is places on the scapula and held in place.  Once the bar is stuck in the scapula’s groove, the hands are placed on the bar but not under it as is the case in the high bar squat.  The hands should be in a position with the knuckles facing the sky, almost as if your were to punch a hole in the ceiling.  Don’t wrap your thumbs around the bar, but rather keep them on the same side as your hand and fingers – you’re not holding the bar up with your hands, you’re only pushing your hands to the front to trap the bar into the scapula (the black and white image above shows a bodybuilder not heeding this advice for whatever reason).  The hands then are drawn toward each other as much as possible to contract the upper back muscles and create a better hold on the bar.  With the wrists straight, the elbows now rotate upwards as much as possible to stabilize the shelf.

The feet positioning might be wider than the high bar squat with the knees flaring outwards to the sides, tracking the directions that the feet are pointed in (10-30° usually).  When squatting down into the hole, the back stays horizontal but the chest still stays open and doesn’t cave in under the weight.  When going below parallel, as you always damn well should, the knees won’t be very forward at all, in comparison to the high bar squat, but also forget about the myth that the knees should never be in front of your toes.  Normally, you’re not going to be able to go as low into the hole as you would with the high bar squat because your hips and knees will be further back than toward the front of your body.

How to High Bar Back Squat

How to Low Bar Back Squat

What’s Your Take On Increasing The Vertical Jump? Let Me Know In The Comments Below!

Scott J.https://ignorelimits.com
I’m SJ. I’m a fitness enthusiast and published author. I transformed my body from a skinny fat 135lbs with 18% body fat to a solid 192lbs at 8% body fat. I became qualified in a field I was passionate about. I founded several online businesses that allow me to pursue ideas and projects in my life that I am passionate about without having to constantly worry about money. I published several eBooks explaining the training and dieting techniques I used to achieve the body I have today. I learnt a plethora of new information on dieting and fitness by reading and applying what I read, to find out what does work and what doesn’t work, because as I’m sure you’ve noticed the health and fitness industry is full of non-sense claims and BS. I found out what was true and what worked for me and applied that knowledge. And you bet I had fun during the whole process.
Previous article
How To Develop A Visible Adonis Belt (V Shape Abs)
Next article
8 Dip Mistakes That’ll Sabotage Your Chest & Triceps Growth

3 BIG Benefits Of Cardio For Bodybuilding

The Most Precious Commodity And My Own Realization

How To Make Bodybuilding Affordable