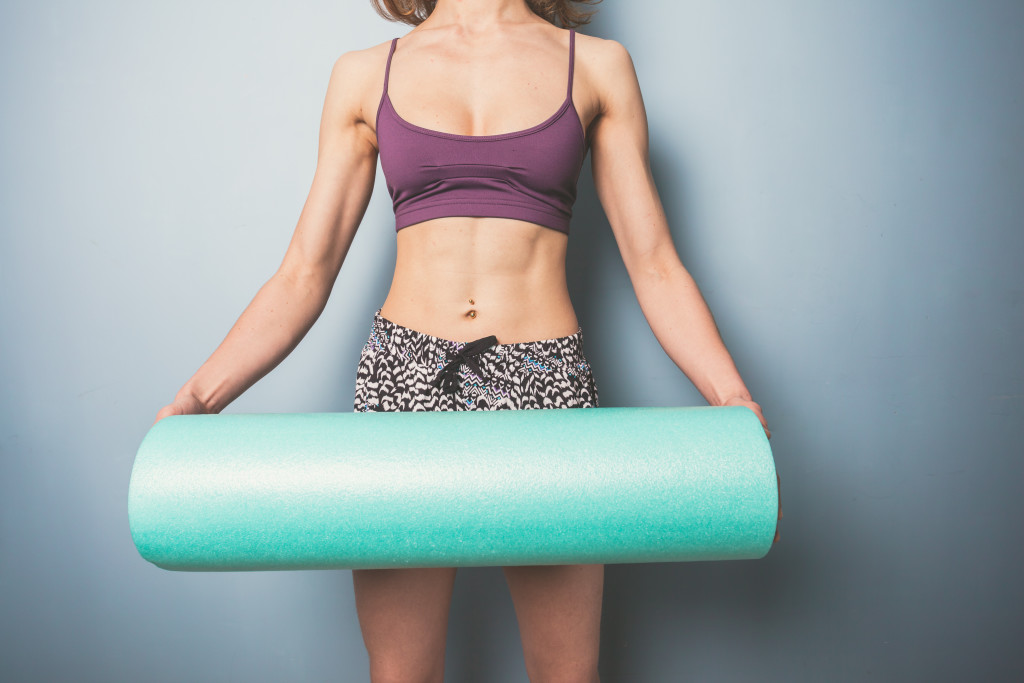 For improving recovery time, working knots out of sore muscles and improving your mobility foam rolling is hard to beat!
That said, many gym-goers see others using a foam roller and just try and replicate what they’re doing which doesn’t always end well – although foam rolling is relatively basics there’s a few mistakes that’re often made but easily fixed.

Are you making any of the 5 foam rolling mistakes listed below?

When an injury, be it a sprain or strain is suffered the first port of call is often the foam roller… however this can be a big mistake!

Foam rolling directly over an injury can do more harm than good.

When it comes to foam rolling, excessively working the injured area can actually create more inflammation and tension in the area, increasing pain and tightness in the muscle. More often than not the area you suspect to be experiencing the injury (the sore spot!) isn’t a result of damage or injury to that particular spot itself…

For example, when encountering IT band pain the IT band itself isn’t at fault, the gluteus maximus (which attaches to the IT band) requires foam rolling and myofascial release.

Many gym-goers are of the assumption that because foam rollers seem to work a treat on your muscles they can provide the same benefits and assistance to joint, tendon and ligament recovery… I can see the logic here however unfortunately it’s not always the best thing to do.

Compared to muscles, your joints get very little blood flow, and as a result of this deems foam rolling to be relatively ineffective.

The amount of pressure placed on your joints (knees and elbows in particular) can cause excessive inflammation. You can roll close to your elbows and knees however I wouldn’t recommend rolling over them.

There’s no ifs or buts about it… foam rolling hurts. A lot.

You’ve probably noticed when foam rolling the faster you roll the less painful it is. Unfortunately if you’re speeding through your foam rolling routine and ticking the box you’re probably not going to be reaping any of the rewards of foam rolling because you’re not doing it properly.

“You need to give your brain enough time to tell your muscles to relax,” says Monica Vazquez, NASM certified personal trainer and USA Track and Field Running Coach.

Movements on the foam roller should be slow and concentrated. If you roll too fast, your muscles won’t have time to adapt to and manage the compression, and you’re not going to eliminate adhesions.

With insufficient time for the muscles to relax and the fascia to be released you’re wasting your time. Slow it down.

Mistake 4 – Compromising Your Posture While Rollin’

This is more-so a problem if you decide to foam roll after an intense lifting or cardio session as you’re already in a state of fatigue.

Holding your body in several of the positions required to foam roll your lower body requires a relatively high amount of core strength, poor posture and movement while foam rolling can quickly turn soreness into injury.

If you find yourself struggling I recommend seeking guidance in-person on your form or, if you’re foam rolling after a workout opt to foam roll either before your workout or later in the day when fatigue isn’t such a major factor… just like when soreness or an injury may be occurring mid workout don’t push through it! Assess what’s actually happening and go back to it at a later time instead of stubbornly pushing through and injuring yourself.

If you’re a beginning to the world of foam rolling and myofascial release it’s probably not in your best interest to jump straight into the deep end with a black, tough as steel foam roller or a rumble roller. These things are tough! Instead of whimpering away and using it only on certain spots I recommend working your way up to a dense foam roller.

Start with the basics, get yourself a blue, moderately dense foam roller and get your body acustomed to both upper body and lower body myofascial release.

Once you’re able to work your way through each muscle group with a lower class foam roller only then do I recommend spending a bit more and getting yourself a rumble roller or battlestar which will get into those sore spots that bit better.

That said, no matter how long you’ve been foam rolling for it never gets particularly easy… particularly on the rhomboids and IT band.

What’s Your Take On Foam Rolling? Let Me Know In The Comments Below!

Scott J.https://ignorelimits.com
I’m SJ. I’m a fitness enthusiast and published author. I transformed my body from a skinny fat 135lbs with 18% body fat to a solid 192lbs at 8% body fat. I became qualified in a field I was passionate about. I founded several online businesses that allow me to pursue ideas and projects in my life that I am passionate about without having to constantly worry about money. I published several eBooks explaining the training and dieting techniques I used to achieve the body I have today. I learnt a plethora of new information on dieting and fitness by reading and applying what I read, to find out what does work and what doesn’t work, because as I’m sure you’ve noticed the health and fitness industry is full of non-sense claims and BS. I found out what was true and what worked for me and applied that knowledge. And you bet I had fun during the whole process.
Previous article
5 Reasons Why CrossFit Sucks
Next article
4 Most Common Squat Mistakes Made In The Gym… Are You Making These?

FST-7: How To Make Gains With Fascia Stretch Training 7

How To: Medicine Ball Slams

6 Lessons From 6 Months Of Boxing Training