How I Learned The Secrets Of Success In Selling

While recently on a weekend road trip I decided to stop in at a small town to stock up on food, conveniently enough I stumbled upon an old second-hand bookshop in the process.
After speaking with the shop owner for a brief while about Dale Carnegie and Napoleon Hill (classic self help authors) he rushed out the back to grab me a book that was recently traded in, he insisted it was a must read.

I left several minutes later with a 1981 print of “How I Learned The Secrets Of Success In Selling” by Frank Bettger. 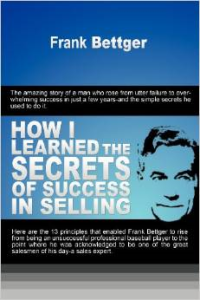 Until a couple of weeks ago I had never heard of this book, since then I’ve read it cover to cover twice and took numerous notes.

Frank elaborates on Benjamin Franklin’s 13 principles for a successful life, and how these were apparent in his own life when on the baseball field as a professional athlete as well as in his sales career.

Here’s my summary of How I Learned The Secrets Of Success In Selling..

13 principles, 13 weeks – spend 1 week laser focusing on each principle before rinsing and repeating.

“If you could give one gift let it be enthusiasm”

Take time to think and plan.
A lack of organization, regardless of the endeavour will lead to a lack of success.

The only self organization method you need:

– Make a list of tasks that must be performed
– Number the list in order of importance
– Start on task 1, do not shift your attention until it’s complete
– Work your way down the list

Find out what others want, then help them get it.

If you don’t have a target aka. a want you’re out of luck.

“No gunner became a sharpshooter without a bullseye”

Imitate Socrates by asking questions.
Questions clarify the needs and wants of others and help you understand their point of view.

When in doubt on a situation utilize the algebraic questioning method (rule up a page in half with columns ‘why’ and ‘why not’).

– Find out the interests of the other person
– Ask compelling questions related to their aforementioned interests
– Listen intently!

Discipline yourself or be disciplined by the world.

Resolutions must become habitual by constant practise and reinforcement.

As Ben Franklin said “The second vice is lying, the first is running into debt, and lying rides upon debts book”.

“Have the strength of character to be true when no one else will know the difference.”

Speak ill of no man.
Speak all the good you know of everybody, even your enemies (it’ll confuse them).

Criticism by coaches, mentors and the like does nothing but harm.
Praise and encouragement forges stars.

Don’t allow external factors and events outside of your control affect your mood, focus on what you can control instead.
You can’t smile and worry at the same time, so smile more.

“He that falls in love with himself will have no rivals”
Benjamin Franklin added this principal in at the last moment as he felt something was missing.

Fear is a lack of faith; lack of faith is ignorance.
The book gets quite spiritual in this part, however the point stressed is have faith in what you’re doing – believe it’s possible and you’ll have the power you need.

Pick up your copy of the book here.

Are there any other little known books that you’d recommend checking out? Let me know in the comments below!

Deskbound: Standing Up To a Sitting World Review