When it comes to building big biceps no gym-goer needs an introduction to the biceps curl.
Most guys alternate between the three version they’re most familiar with – the regular dumbbell curl, the barbell curl and the over the knee concentration curl.

If you want to build monumental biceps, if you want to avoid the plateaus that often come as a result of sticking to one or two versions of the regular bicep curl you need to work on other variations too.

For this variation we’ll be utilizing the straight bar attachment on the cable machine, a fantastic choice to keep tension on the biceps for the duration of the repetition.

Stand up straight with a cable straight bar attachment, rotate your palms until they’re facing towards you and tuck your elbows into your sides.

Curl the straight bar up  by contracting your biceps and moving your forearm, your upper arm should not move at all.

Curl until the bar is at shoulder height.

Squeeze and hold this contraction for one second.

Slowly lower the straight bar back down until your arm is extended in front of you. 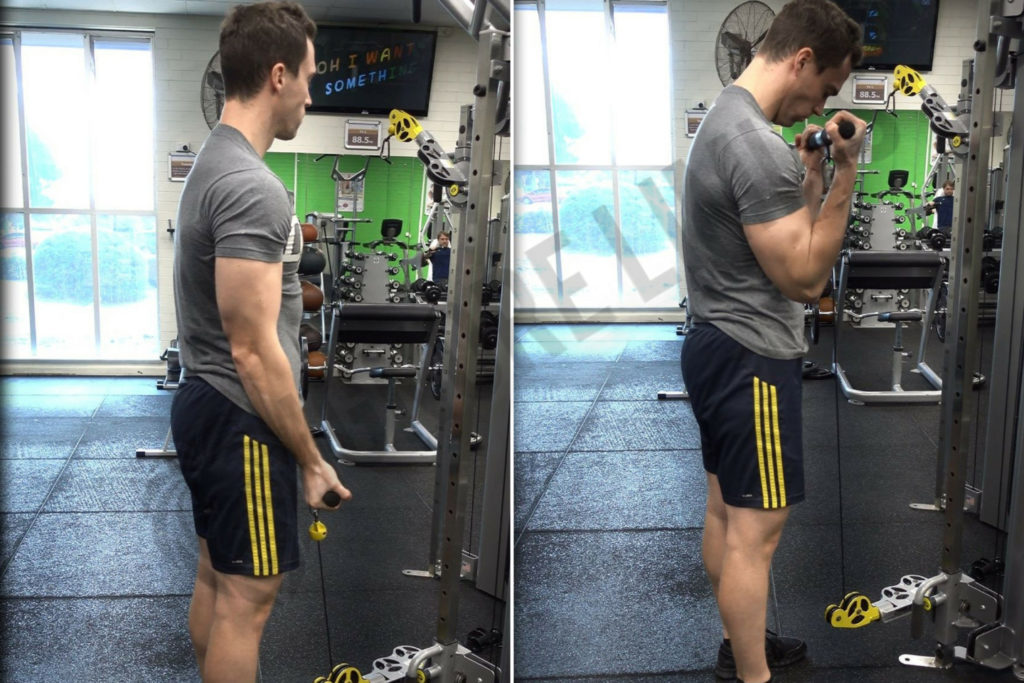 A hammer curl while performed laying down on a incline bench adjusted to a 45 degree angle.
The dead hang of the arms ensures no momentum or swinging comes into play while performing your hammer curls – providing superior isolation.

A hammer curl performed one dumbbell at a time being curled up towards the sternum.
Performed with palms facing towards your body.

Every guy in the gym wants to swing around heavy weight on biceps, I get that.

As I said earlier – if you want to build big arms you’re going to have to lift heavy, HOWEVER form always have and always will take priority over the weight being lifted.
The bottom portion of a bicep curl is without a doubt the hardest portion of the movement, and when lifting too heavy many gym-goers attempt to swing backwards or hip thrust to attempt to move the weight.
Using momentum to move the weight takes tension off the bicep, doing you no good.
If you’re swinging and swaying your back on every repetition you’re also placing your lower back at a high risk of injury – not good.

Pick a weight that’s heavy for you to perform with good form, save the cheat curls for Arnold.

it didn’t take me long to realize that training my arms every single day wasn’t getting me very far in terms of results given all the effort I was exerting.

More isn’t always better – if you’re training frequency is any higher than this you may very well be hindering your own progress, like all other muscle groups the biceps and triceps require time to recover.

If you don’t generally train in the lower rep range I recommend you give it a try, stop lifting in the 10 – 15 rep range for at least a month and focus on heavy, low rep sets. Once you start to see results you won’t want to go back.

Now, you may still think high reps are beneficial, but let me tell you they’re far from it.

High repetitions result in increased stress on your CNS, increase in localized inflammation and increased soreness.

“Movements or exercises that do not give the muscle the required resistance, but are the kind that involve a great number of repetitions, never break down any tissue, to speak of. These movements involve a forcing process that cause the blood to swell up the muscle, and simply pump them up”– George F. Jowett, 1926

Any Questions Regarding The Cable Straight Bar Biceps Curl? Ask Below!