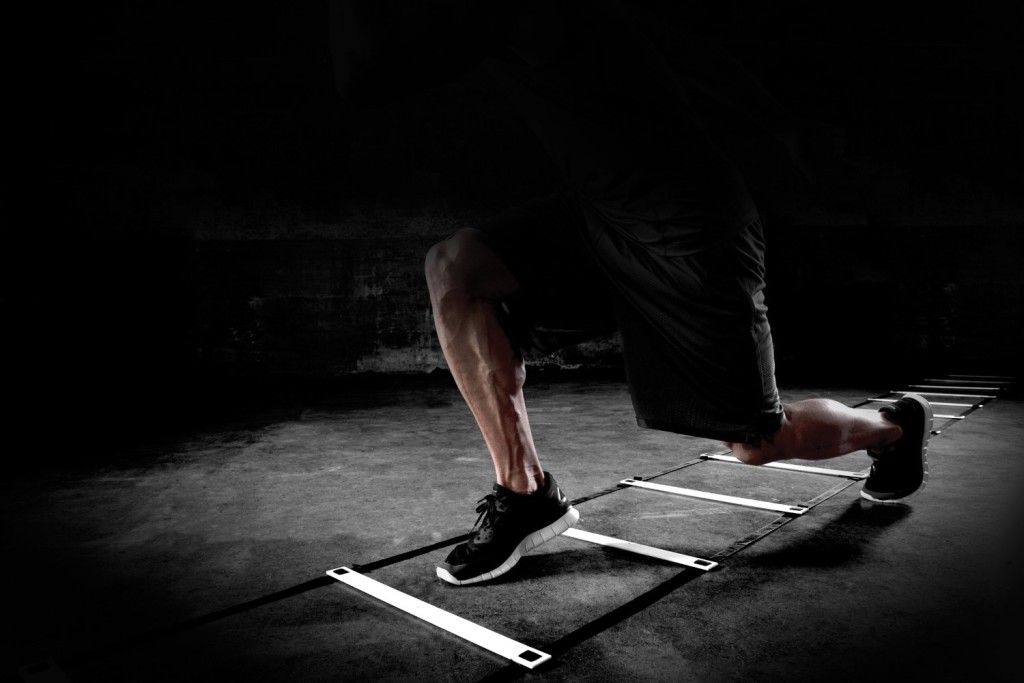 What Is An Agility Ladder

An agility ladder is an expensive piece of exercise equipment used for performing various footwork and hand drills to increase your speed, coordination and cognitive abilities.
Moving through the rungs of an agility ladder with fast footwork is a surprisingly good workout that’ll increase your performance in sports including basketball and football. Or perhaps you’re like me and are just looking to mix up your routine!

Regardless of your motive the agility ladder is an expensive, engaging form of cardio that can be performed in areas with minimal space.

Hell, if you’re looking to save money you can use chalk or paint and draw your own agility ladder on the floor, that said the real deal is cheap enough.
A standard agility ladder is 16 feet long and is comprised of 18 inch squares.

If precision and coordination are your motives behind training with an agility ladder I highly recommend you purchase a physical agility ladder, as with a chalked or painted on agility ladder you’re often unaware of when you make a mistake or stumble as you’re not landing on a physical ladder.

Here’s the agility ladder I use and recommend.

If coordination isn’t your forte that’s fine! You’ll develop those skills along the way, walking through the ladder on the balls of your feet is a fantastic way to get a feel for the nimbleness required for the agility ladder drills you’re working your way up to. Skipping, shuffling and the technical stuff can come later. 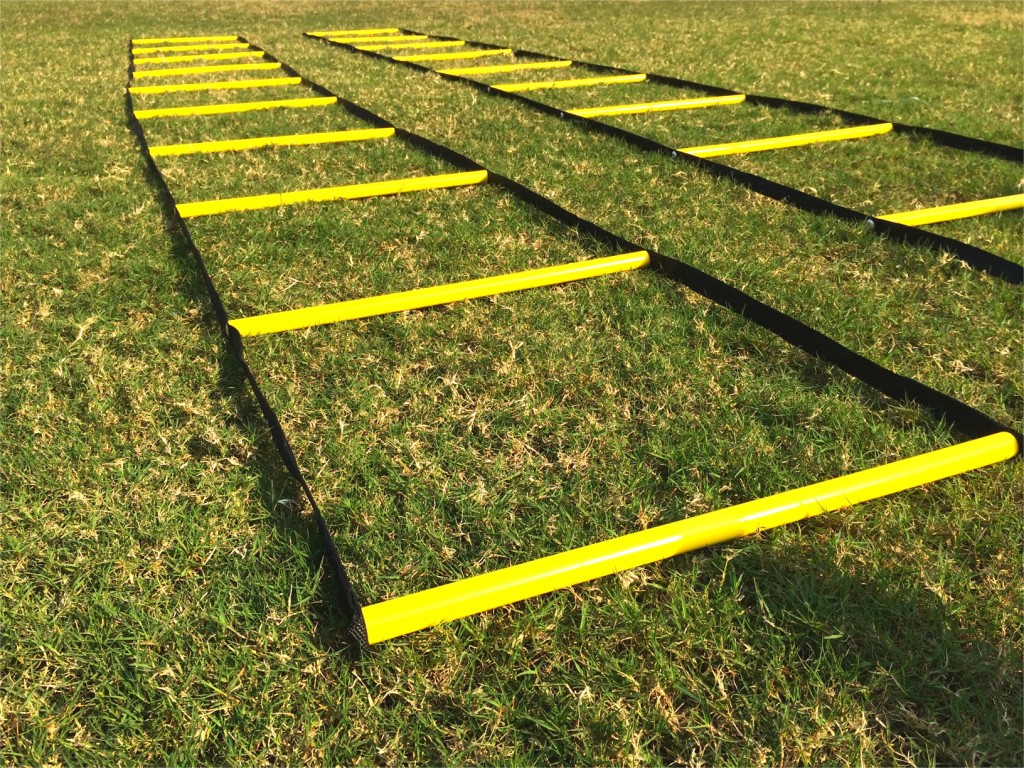 Quick bursts of single leg jumps, in and outs, high knees and shuffles when practised regularly will improve the speed and quality of your footwork.
Unlike isolation exercises in the gym, this functional cardio will translate into increased skills in your chosen discipline… whether this be football, martial arts, basketball or even dancing.

The key to performing fast, quality movements through the agility is all about nimbleness and being light on your toes.
Once you’ve learnt how to distribute and balance your weight on the balls of your feet while negotiating an agility ladder your overall agility will also increase.

The fast, constant movements of shuffling, jumping, hopping and running which require the lower body from the hips down to negotiate and move in many, many different patterns will build and strengthen your ligaments, tendons and joints.

Note that agility ladder drills are not used for muscle building.

Agility ladder drills will get your heart rate up, and as a result burn calories!
How many calories you burn is dependant upon many factors including your age, current weight, duration and intensity of drills.

A new study from the Air Force Research Laboratory shows that agility training can improve your cognitive performance.

Military personnel were divided into two groups for six weeks of training. The first group participated in the military’s standard physical training (jogging with calisthenics like jumping jacks and burpees), while the second group underwent agility training (ladder drills and shuttle runs). After six weeks, the first group increased their endurance. On the other hand, the group performing agility training improved their VO2 max, athletic footwork, memory, and concentration.

Along with cognitive function, there are other benefits to agility training. “Adding variety to your exercise routine can help you avoid burnout and plateaus,” she says. “Agility training may be another way to help you meet your exercise goals while keeping your mind and body active.”

Agility Ladder Drills To Get You Started

A picture (or video) says a thousand words.
Check out the diagrams and example videos below and give these agility ladder drills a go! 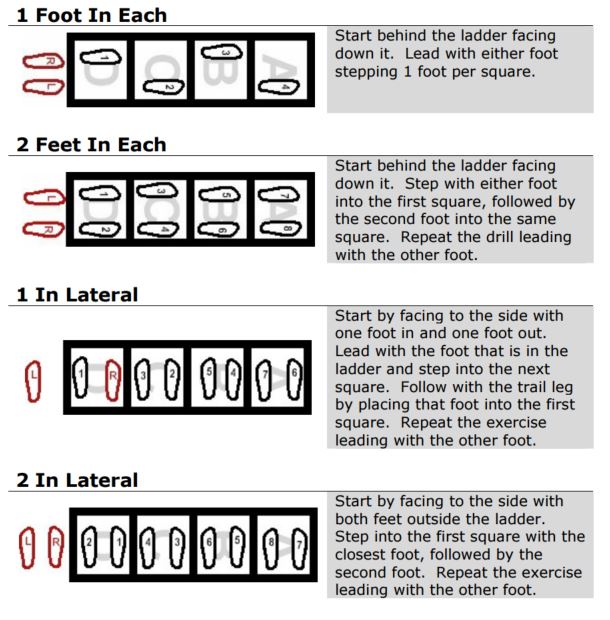 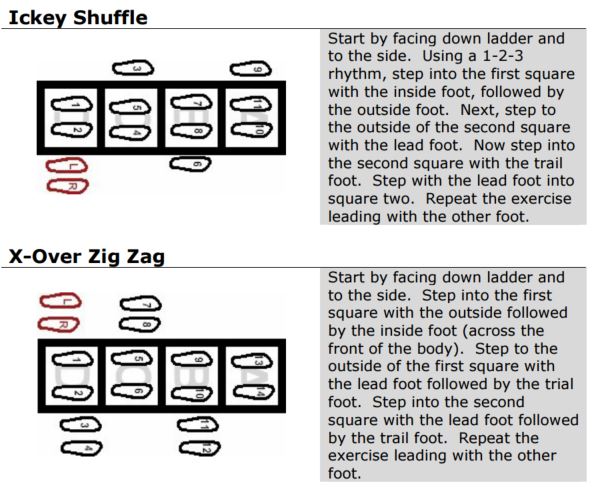 There’s no right or wrong way to structure your agility ladder workout, however here are a few structures and ideas I’ve tried that work well…

Use a timer, perform constant drills and rest for predetermined intervals.

Set a timer for 5, 10 or 15 minutes and perform as many rounds of a sequence or series of sequences within this time frame.

With your training buddy take it in turns completing a sequence or two on the ladder. Go for rounds/time.

Create a circuit utilizing the agility ladder along with other functional speed/explosive movements such as the jump rope and box jump.

What’s Your Take On Agility Ladder Drills? Me Know In The Comments Below!