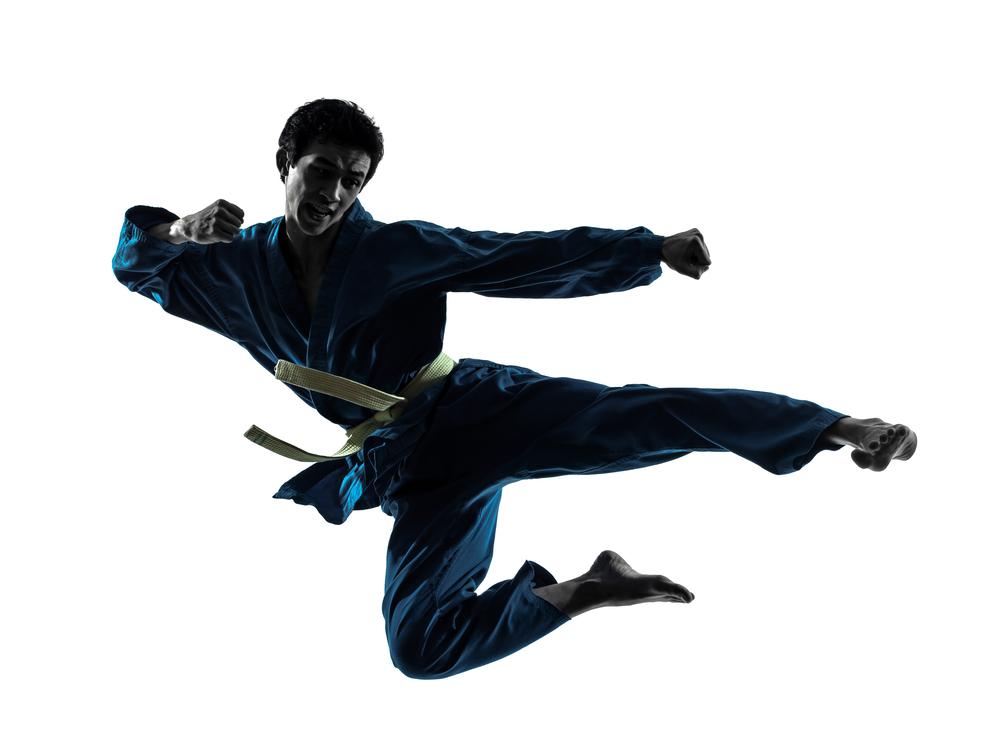 Mixed martial arts, boxing, karate, gracie jiu jitsu… these are all forms of martial arts which’re all too often dismissed by guys for a number of reasons.
‘Martial arts doesn’t build muscle’ and ‘getting started with martial arts is indimidating’ are the two most common copouts I hear from guys when they dismiss the benefits of martial arts.

And they’re right, you’re not going to stack on slabs of lean muscle mass doing karate, judo, thai boxing or any other form of martial arts for that matter.
When it comes to the intimidation of getting started at the end of the day learning a martial art is no different to signing up to a CrossFit class, joining a gym for the first time or standing on stage at your first public speaking event – new experiences, things that we haven’t done and thus have no reference point in our minds of our previous successes in this field can make us nervous and uneasy.

Muscle and learning curve aside, martial arts (regardless of style) offers a number of big benefits that unless you’ve given it a try you probably wouldn’t pick up on…

Why Should You Enter The Dojo? Here Are 7 Benefits Of Martial Arts

Before we delve into the  7 biggest benefits I’ve found from martial arts it’s worth noting that there are many, many more benefits that I haven’t covered here as they’re relative common sense and are similiar benefits to any other form of exercise such as burning calories, the positive feeling as feel good hormones are released due to going all out with your effort along with the flexibility and mobility gained from various strikes, holds and kicks (loosening up of your hip flexors and shoulders).

The 7 biggest benefits I’ve noticed from martial arts include:

Certain forms of martial arts utilize a wider array of precision moves than others, but regardless of which form of martial arts you choose to pursue you’ll be drastically increasing your coordination. From punching accuracy to switching guards, submissions and kicks – the functional coordination you build through martial arts will transfer across to your coordination on the sporting field and in the gym (which from my experience comes in handy for bodyweight exercises such as the one arm push-up and pistol squat).

When you’ve got a goal, be it a belt, a title fight a certain maneveur you want to learn and a date by which it must be executed you instantly become that much more accountable. You won’t miss your workouts, you won’t dismiss the dojo and you certainly won’t make excuses.

You’ll build the discipline that’ll help you build a success business, have success relationships and conquer essentially any realistic goal you have through the sheer discipline, determination and grit you learnt via your martial arts training.

You may be able to bench press 315lbs for 5 reps but strength isn’t all that matters when it comes to martial arts.
Leverage, speed and skill all play extremely crucial roles in both striking and submission in both martial arts drills and bouts.

Many, many guys go into martial arts, be it from a sporting or gym background and are quickly humbled when they realize just how different martial arts is, how much of a learning curve they’ve encountered along with just how skilfull and advanced their coach is.

I can guarantee you there’s not a single jiu jitsu black belt out there that isn’t a mentally tough, goal setting go-getter.
Especially as you venture up the ranks, there’s no excuse makers, no ‘I didn’t feel like training today’ kind of people and no negativity.

The skill, discipline, dedication and sheer willpower required to reach the elite ranks of any martial arts discipline are non-negotiable.
If you find yourself stuck around people in your day to day life that constantly complain and are negative excuse-makers then you’re spending your time in the wrong place.

Get to the dojo, you’ll meet like-minded people travelling the same road as yourself.

You’ll Learn How To Defend Yourself Correctly

Learning how to defend yourself correctly and diffuse hostile situations isn’t only an advantage to your well-being, but it’ll also give you a nice boost of confidence too.
Through martial arts training over time you’ll re-program natural reactions to punches, swings and grabs – ensuring you’re defending yourself and countering in the most efficient way possible.

Just like riding a bike, martial arts is not something you’ll forget after you stop – through immense repetition it’ll be with you for life.

Progressing from white belt, conquering that BJJ tournament, spending hours on the mat, running through drills hundreds of times… goal setting and progression are one of the major keys to success in martial arts which you’ll learn also transfer over to any other endeavour in life you pursue.

What’s Your Take On Martial Arts? Let Me Know In The Comments Below!

Scott J.https://ignorelimits.com
I’m SJ. I’m a fitness enthusiast and published author. I transformed my body from a skinny fat 135lbs with 18% body fat to a solid 192lbs at 8% body fat. I became qualified in a field I was passionate about. I founded several online businesses that allow me to pursue ideas and projects in my life that I am passionate about without having to constantly worry about money. I published several eBooks explaining the training and dieting techniques I used to achieve the body I have today. I learnt a plethora of new information on dieting and fitness by reading and applying what I read, to find out what does work and what doesn’t work, because as I’m sure you’ve noticed the health and fitness industry is full of non-sense claims and BS. I found out what was true and what worked for me and applied that knowledge. And you bet I had fun during the whole process.
Previous article
4 Tips To Beat Cravings When Cutting
Next article
4 Exercises To Improve Your Posture

4 Compound Dumbbell Exercises You Need To Add To Your Routine

Picasso’s Dichotomy – A Reminder On How To Live Well

Traffic University: How To Use Your Dead Time To Get Ahead